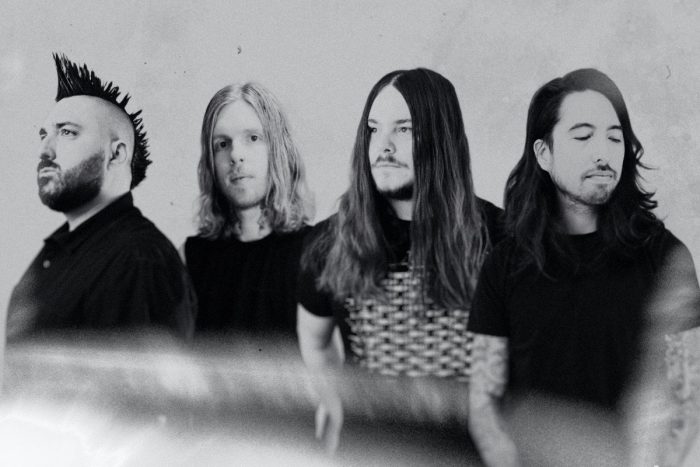 With their latest era upon them, Of Mice & Men did things a little differently, dropping three consecutive EPs: Timeless (February 2021), Bloom (May 2021), and Ad Infinitum (December 2021).

The release of Ad Infinitum marked the final piece of the puzzle and heralded in their seventh LP, Echo—a work not only created over Zoom but also influenced by one of the most tumultuous years in human history. We sat down with vocalist Aaron Pauley to dig into how it all came together and more.

Hysteria: We love how the band chose to release this album as a set of three EPs. Was there a particular reason for that?

Aaron: You know, it’s something that we’ve wanted to do for several albums now. And when we had fulfilled our contract with Rise, when we were talking with potential labels for this release, it was something that we always brought to the table. We wanted to create an album’s worth of material over a set amount of time. And we wanted to release songs as they were created and release EPs as they were created. Some labels were like, that’s not how you do it (laughs). SharpTone was cool with the idea though, and very excited about it. They gave their blessing and allowance, and they were awesome creative partners in facilitating too.

We wanted to release music because we’re a band that’s always working on songs. We’re always writing about our lives and our human experiences. That’s our way of connecting with the world, you know? As technology has evolved and the way that people listen to music has changed, we wanted to try and see what it was like being on the creative side and expressing ourselves really honestly and openly about what we’re living and what we’re going through. And then sharing that with our fans while we’re still sort of there in that place. Instead of, you know, spending six months to a year, writing a bunch of songs, curating them, recording them, mixing and mastering, album art, music videos, and then you put it out. We wanted to see what it would be like to send text messages rather than writing letters and putting them in the post. If that analogy makes sense.

We love that analogy. So you created a lot of the album over Zoom. How do you feel the process compared to your last six LPs?

You know, it’s funny. Things like dropouts and random disconnects were probably the only real challenge. The way we work together typically is all of us in a room, and we’re usually huddled around somebody’s computer. Everybody’s got computers set up because we’re all pretty proficient in using the software and whatnot. We’ve done all our pre-production and stuff ourselves for several past releases.

So yeah, the biggest hurdle was probably just the technical difficulties, things like zoom meeting rooms deciding, oh you’ve been in here long enough, close it (laughs). Or getting audio routed and things like that. But as far as the creative process, as far as the communication, which for us as a band communication is our top priority, just the way that we communicate with one another. It wasn’t too big of a challenge. The fact that we all live a few hours apart from each other, given the traffic, we were probably going to end up doing a lot of the writing that way anyway. The pandemic and initial lockdowns just solidified that that was going to be the way that we were going to do it.

Our human experience of today is really just sort of an echo of whatever the human experience means historically. And I feel like when you can start to think about your own life in those terms, you not only become more connected with the people around you, you become more connected with where you come from and the people that came hundreds and thousands of years before you.
[Aaron Pauley]

You touched on self-producing there, and this time around, you produced, mixed and mastered the record. That must’ve been such a cool experience.

We do all of our own pre-production. A lot of time, before we even go into the studio, we have basically finished versions of songs. We felt that we could do it. We hadn’t done it before, but we wanted to try knowing that worst-case scenario; if the label decided it wasn’t up to scratch, we would have complete pre-production and could go back and re-record it.

I had mixed and mastered our live at Brixton release that came out in; I believe 2014 or 15. I can’t recall exactly. But it was something that I used to do even before I was in Of Mice & Men. It’s something I’ve always been passionate about, the music production side. It was a cool experience because we were all sort of the captain of the ship. We had all hands on deck, all hands on the wheel. It made for a very honest record in terms of how we sound, how our songs came together. Just the overall tonality and feel of the record. Echo feels like a super-refined version of ourselves because there’s nothing else on it (laughs).

When I write lyrics, it’s a very myopic exercise. I’m never really thinking about the bigger picture. To me, that ends up sort of putting me in a box where I know where the boundaries are and I know where out of bounds is, and I start on the outside and work my way in, and I end up in a very limited space. It wasn’t really until the record was done that I read everything back and tried to ask myself what I was writing about (laughs). For me, music is about trying to be as honest as I can in expressing whatever it is I am during that song. And expressing whatever the music is saying. For us, music always comes first. Before the vocals, before lyrics, before anything.

We always talk about what we’re trying to convey in just the instrumental side. And then I try to just expound on that, with lyrics and vocals. I think a lot of the record puts into perspective things like mortality, things like legacy and what that means. As you get older, the idea of echo being the human experience that we live now. It’s different because of things like technology, the future is always now because the present is always slipping into the past. A lot of Echo really just had to do with relating our very basic human experiences. And the greatest things and the most difficult things of the human experience being very deeply intertwined. With the love that we feel for our parents and then how we feel when we lose them and how people have been going through those joys and that devastating grief for literally thousands and thousands of years and how our human experience of today is really just sort of an echo of whatever the human experience means historically.

Let’s talk about the cover of Helplessly Hoping that closes out the record. What is it about that song that struck you?

I used to listen to that song a lot as a kid. I grew up listening to a lot of singer-songwriter music with my dad. It was a song that kind of found me again. Maybe that sounds esoteric and weird, but in dealing with the loss of my mother-in-law and the process of having to go to her house and empty all of the stuff out, that song kind of found me again after not really being very prevalent in my life. I heard it a bunch of times, and it just hit me that I was going to do a cover of it, and I didn’t really know why.

I didn’t know how to explain it to my bandmates, other than just to say I want to do a cover of this song, and I hear it in my head with just violins and cellos and guitar and as something that’s stripped back. And my bandmates were like, yeah, do it. I shared it with them, and I feel like for me as a musician, the best way I can honour the importance of certain songs and things like that is by sharing them with our audience and by performing them to the best of my abilities. And not at all in a self-aggrandising way, but just, you know, this is really important to me. This is my interpretation of it. And I want to share that with you and really nothing beyond that.

That’s beautiful. And such a lovely tribute to your mother-in-law too.

Yeah. She loved music. Music was so important to her. It just felt like a good thing to do.

We’d love to get back on the road if it’s safe and it returns to a state where people can enjoy it. And it doesn’t have to be a contentious point for either political debate or stress. You know, live music is a place where people go to get away from all of that. In the meantime, we’re just going to keep writing new music. There’s already new music in the works. We’re just going to keep creating. We really want to keep that conversation and connection with people who have allowed our music to mean something to them. I feel like if there is any greater purpose for people in the world, ours is to try and connect with others by sharing our experiences.