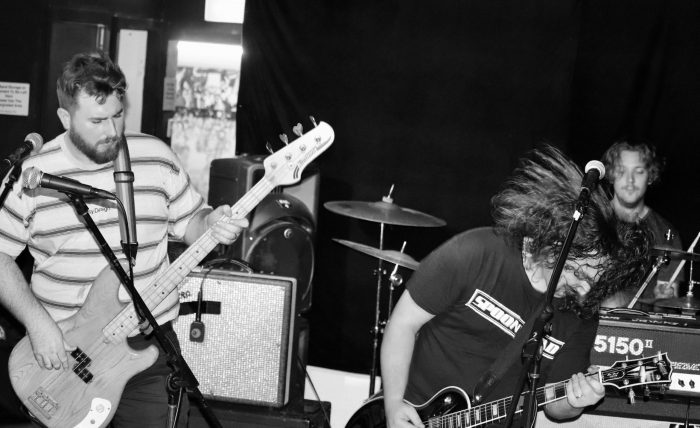 Forgo your cup of coffee and blast The Meantime’s latest single Telepathetic for an energy boost instead.

It’s a fully-charged blend of rock, grunge and punk, something that’s defined the Central Coast trio’s past releases. Before the track officially dropped, we caught up with frontman Daniel Bailey to chat about how it all came together.

Daniel: I started The Meantime in 2012-2013 as a side-project for the band I was in at the time. Our drummer, Kurt Burns, joined at the end of 2013. We were focused on writing and trying to find a bass player. It wasn’t until 2015-2016 that we started taking it seriously with our songwriting. We then kept focusing on writing and playing live shows. A couple of years ago, our bassist Liam Collins joined, and now we’re trying to push things harder than ever. We feel like we’re at a good place in the band.

It’s been a few years since the release of your last single. What has the band been up to since then?

Writing. Between the last release and now, we’ve been doing stuff outside of the band too. We recorded this song at the end of last year, but then with a lot of personal things going on in our lives, we took a step back.

Tell us about how the new single, Telepathetic, came together.

I had a couple of riff ideas, and then I took them to band practice. That’s usually how our songs come together. I come up with a rough idea of a structure, then I take it to rehearsal and we jam on it. It came together pretty quickly. Everything fell into place.

Telepathetic is about being stuck in a bad place and wanting to get out but not being sure how.
[ Daniel Bailey ]

It seems like everyone is involved. That’s a great dynamic.

We’re pretty comfortable in our roles in the band. That’s where that comes from. I will have 70% of a song for the most part, and then I just finalise it with the band. We’re always happy to trial everyone’s ideas. We like to have everyone excited about it.

Once Liam joined the band, it was like we had the last piece of the puzzle. That sounds so cliché, but we’ve played with a few bass players and friends before, and it wasn’t until we started playing with Liam that everything clicked. After that, things went to the next level. It’s good we’re there now because everyone can do their own thing and it works.

Was this single a DIY one, or did you head into a studio?

It was kind of both. We recorded the live tracks with our friend Riley Brooke at Honey Studios. He asked us to come in and record so he could get something happening as a tester for his gear. We were pretty happy with it, so we kept it. He did a rough mix, and then we did a bit more of a mix and took it off to be mastered by Rhys Zacher at Spinlight Studio.

What inspired the track lyrically?

It’s hard to describe it because I’m not really a storyteller. I just write different lines that have the same theme. Telepathetic is about being stuck in a bad place and wanting to get out but not being sure how. It could be a bad relationship or a workplace issue. Everyone has that kind of thing at some point in their life.

And then sonically, who would you say are some of the band’s biggest influences?

That’s another tough one. Collectively, grunge and alternative rock stuff. Punk and indie rock also inspires us. We always joke that we’re always the punkier or heavier band on the lineup. We’re always the one that’s a little bit different. Individually, we all have our own influences, and I think that helps our style. We all bring different elements to each part of the song.

What else can we expect to see from the band this year?

At the moment, we are trying to finalise a few shows. We have one locked in for the 21st of August at Frankie’s Pizza in Sydney. There will hopefully be a few more this year. We’ve also started talking about recording our next single or putting an EP out.

Telepathetic will be available on all streaming platforms on 2nd July.