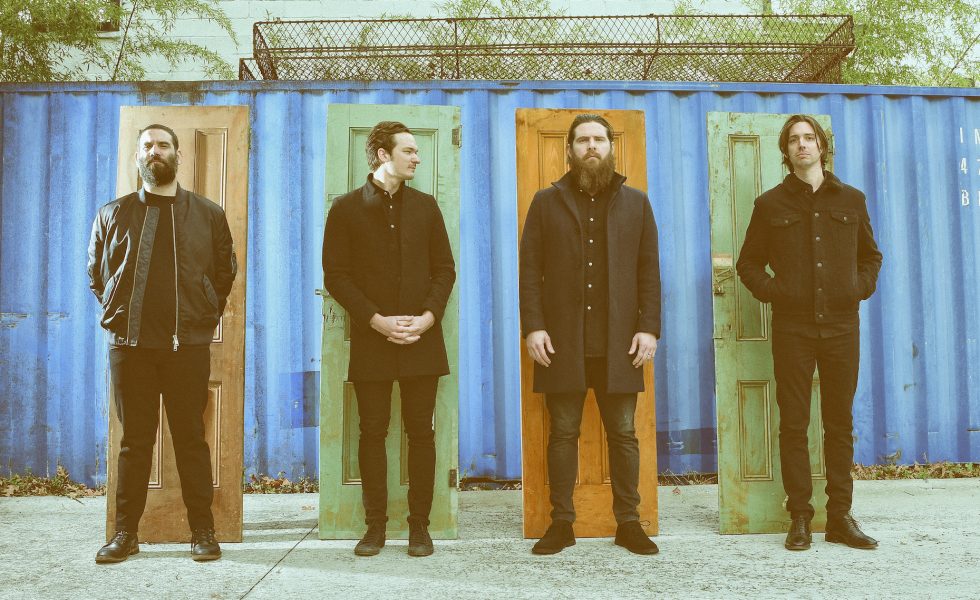 MANCHESTER ORCHESTRA // From Birth To Beyond

Manchester Orchestra have never shied away from showing their emotions and it’s never felt more true than on their sixth and latest LP, The Million Masks Of God.

Where 2017’s A Black Mile… explored the journey of life, TMMOG asks: what’s next? Taking an intensely personal turn, the record also gave the band a chance to pay tribute to guitarist Robert MacDowell’s father, who passed away in 2019. We caught up with frontman Andy Hull to chat about the record and the process of putting it together.

Hysteria: Tell us about the concept of The Million Masks Of God. We’ve heard the band went into it wanting to create a multi-tiered, movie-album.

Andy: In around 2016, we decided we wanted to commit to the album format and stretch that as far as we could. If our last album was from the beginning of life to becoming a parent, this record was trying to take the next step into understanding what comes next. It’s hard to wrap it all together in one big thought, but ultimately it was about looking at a normal human life and realising the ups-and-downs, beauty, devastation, and everything is all part of it. We wanted to connect it to a somewhat linear story.

That’s a beautiful message to have in these current circumstances.

That gave us inspiration, hope and energy while we were making it and even more so now. We work together in the studio almost every day on lots of different projects; we were having a discussion the other day about how grateful we are that what we’ve created has a somewhat positive message to it. It may not be clean and clear to everyone that it’s a positive message, but to us, it feels like it should be an appreciation of life.

You’ve said the death of Robert’s father influenced the album to an extent too.

It’s a difficult topic to try and unwind. He wasn’t just Robert’s dad; he was like a band father to all of us. We wrote half of the record whilst he was fighting for his life and the other half after that. In many ways, the record is a love record to Rob. Aside from being my actual brother-in-law, he’s my brother. The two of us work closely together; doing something like this was a challenge, but we feel very positive about it after the fact.

Tell us about how you approached writing in tandem, especially with those two different concepts.

When you want to make something intentionally connected, the songs stop being singular and instead become giant pieces of a puzzle- trying to figure out how it all works together is a challenge in itself. The way we have written together for a long time is being vulnerable.  This was a difficult topic to be vulnerable about because it was so fresh. While Robert and I can talk about things openly, I was trying not to exploit a painful part of his life. I didn’t want to sell an album based on that, so we had to figure out how to do it the right way.

We want to create records that intertwine with our lives but also reach other places. We want our music to ask hard questions and give hard answers.
[Andy Hull]

In terms of putting the record together, what were some of your stand-out moments?

I always have to mention our amazing, genius Australian collaborator Catherine Marks. She gathers energy well. Weirdly, we had the most fun putting this record together. We could be really honest with what we were trying to get across.  We spent 16-18 months on this record; everyone was committed to their role through it. It’s hard to find a producer that’s down to spend months working on something with you, so I have to mention Ethan Gruska too.

You have to grow with your album; it felt like we did on Masks. We had all these writing sessions, our time in the studio, and we spent all this time in the Carolinas. We took a couple of months off it and then came back to it. That gave everyone the space to appreciate what’d been done instead of judging it too harshly. Sometimes, when you’re confined by time or pressure, you can turn on yourself. We didn’t allow ourselves to do that. We’d walk away and then re-approach things later and either be happy with what we’d done or fix what we weren’t pleased with.

What did you learn from A Black Mile that you brought to this record?

That was such a different experience. We were trying to figure out what we wanted to be and what we wanted our music to be. It felt risky and dangerous the whole time, even if the music doesn’t sound like it. We were committing to an idea. None of us knew what the outcome would be-it took a lot of faith to dive into it. This time around, we knew what the process would be. We had a lot of conversations before we even started. We wanted to give the songs room to live, grow and evolve.

Do you know who Manchester Orchestra is now?

In retrospect, Black Mile felt like a great beginning. It was enlightening. Now, Rob and I both understand what our band can do. We want to create records that intertwine with our lives but also reach other places. We want our music to ask hard questions and give hard answers. We went into Masks with a laid-out plan. We didn’t need to beat ourselves up if our tracks weren’t realised. We were just grateful and understood that time would sort it out.

I’m not sure if we have it all figured out. The best part of being in this band is that there are no rules to what we want to try and do. I’m not sure if there’s a genre we’ve landed on; it keeps it exciting for us. We can keep pushing it as long as we all feel connected and proud of our work.

Where do you go from here?

I’m a lunatic. I started thinking about the next album the second we finished Masks; it’s always a dance with the things you release. I just think we have so much more to learn. It’s a nice thing, being with a  group of musicians who all believe the same thing and are willing to keep pushing further. I don’t know what’s next for our band, that excites me.

Social Copy: “If our last album was from the beginning of life to becoming a parent, this record was trying to take the next step into understanding what comes next. It’s hard to wrap it all together in one big thought, but ultimately it was about looking at a normal human life and realising the ups-and-downs, beauty, devastation, and everything is all part of it. We wanted to connect it to a somewhat linear story.”