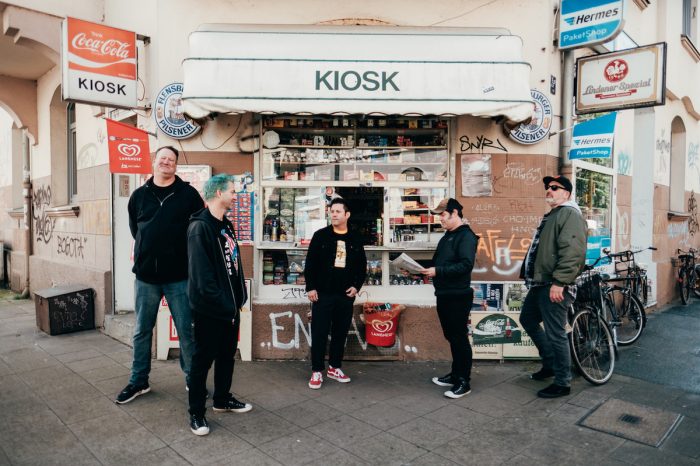 MORE: KICK OUT THE JAMS: LOSER’S Songs For Slacking Off Over // THE HYST LIST: The Best Jams Of 2019 // DOWNLOAD FESTIVAL AUSTRALIA: 6 Heavy Bands You Can Not Miss! REVIEWS: POLARIS: The Death Of Me // SEPULTURA: Quadra // ANTAGONIST A.D: Through Fire // RELAPSE: Psychotherapy

Having released multiple albums amongst playing decades of shows, Lagwagon are preparing to return to Australia this March and we’re pretty keen to pull up our socks for it. So, it seemed right to begin a conversation with Cape regarding the weather similarities between San Francisco and Melbourne, and how they choose their support bands, cause there’s got to be some sort of method and so, there is.

Cape says that: “It’s a similar process that happens every time. Some months ago, I sat with some of the other dudes in the band and we listened to all sorts of bands.”

Noting that, “Australia’s a bit different though than anywhere else because in each city you have a different band; most of the tours that we do when we go to a country we tour with the same two other bands the entire tour and then maybe there’s a local opener every night or two but in Australia, it’s different bands each night, so, it’s kind of extra cool that way.”

After they’d narrowed it down, Cape says: “Half the time, you’re out to dinner with friends when the opening band is playing anyway.”

In between laughter, Cape notes that “That’s kind of the screwed-up thing about it, is you’re not even seeing it. I mean, I’ve been coming here [Australia] all the time, so I’ve got a lot of close friends, probably a dinner, or something … maybe you’re at the pub next door or something … but yeah, we’ve got that settled.”

Despite that, a lot of us like to warm up during the opening band’s set, and it’s unlikely we’ll miss their Australian supports. When Lagwagon do arrive, however, Cape says that, “We play a mix of all of our records, we’ll play something from our new record [Railer, 2019], maybe throw in one song from the first record [Duh, 1992] but I think we generally try to cover something from every area of the band.”

When discussing where Cape found the influence for Railer, he says, “Ah, it’s easy. Same place I always do, y’know, the things that I rant and rave about with close friends or family. The sort of things that piss you off. Injustice, generally politics have some kind of influence on you, if you pay attention or care to. I’m beginning to be a big component of not caring as much as I used to about a lot of things because I’m … getting older now and I want to enjoy my life …”

Cape continues, “It’s pretty in line with letting go and trying to just really enjoy your life and that means something important to further, kinda, peaceful relations in the world with people in general because you need to be happy.”

Through the muffled phone line and barking neighbour dogs, Cape revamps the contrast to his lyrics by saying, “There’s another part of me that’s still very angry and that part of me is because I feel like there’s a certain amount of imperfect discussion that can happen in punk rock or heavy music like we make or just heavy rock stuff or aggressive music, that it’s also a good spot for letting go of some angst, so I went back to a little bit more of the dark stuff and just opinions that I have about things and trying not to be afraid to express them.”

When prompted, Cape elaborates on letting go, “In general, I think sometimes it’s probably a part of growing old and you question the next generation and you question the things that are happening in the world as far as the revolution that’s happening or not happening. This is a big, big question … I mean, to talk about what it is that’s disturbing … I mean, where do I begin. Human beings are dangerous and it’s scary. We’re also lovely and beautiful. There’s a lot of indoctrination that’s being handed down and there’s a lot of ignorance that seems to be becoming more and more common to embrace and I feel like we live a little bit in the world where you can say something and the person who said it and it might be true but there are a lot of disturbing things happening to me and the world, and that’s just been my experience in my life. I feel dangerous things happening … but I’m guessing it’s always been that way for people; having this feeling as they grow older. As we grow older, we become more vulnerable … Again, pretty big subject matter but that’s sort of what I always write about. I tend to write about things that I’m truly inspired by or I catch it in a way that I can believe what I’m saying and if someone loves the song, I’ve gotta sing it a thousand times so it’s gotta be okay.”