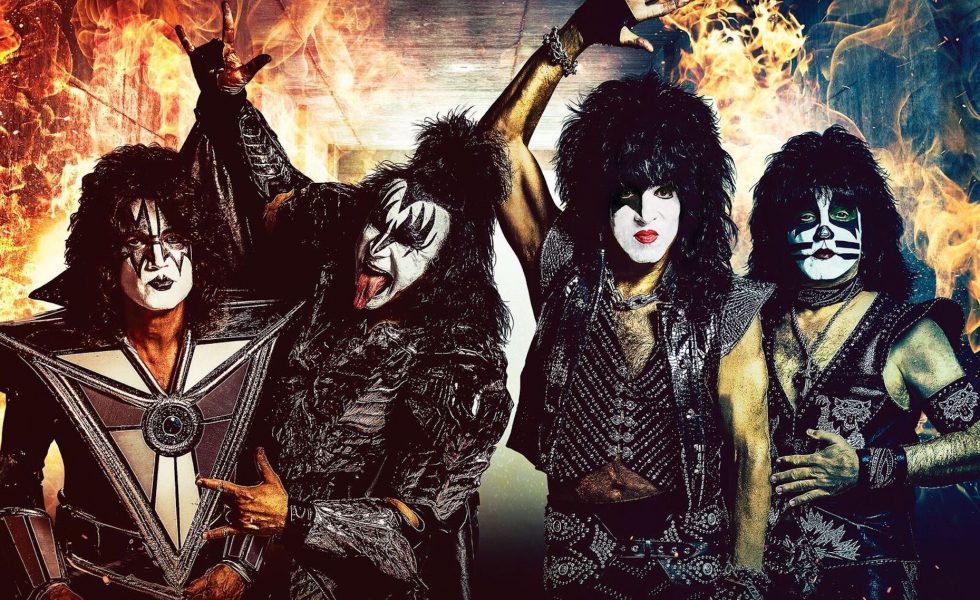 About one year from now, KISS, who need no introduction, will be touring in Australia.

And in the words of guitarist Tommy Thayer, they will be blowing it up. “Figuratively and literally!” The Spaceman cries.

You’d expect nothing less than the blowing up of our stadiums by KISS. Performing in 2003 with the Melbourne Symphony Orchestra, no small feat, a few years back touring with Mötley Crüe—two of the biggest names in rock history, again, no small feat–and KISS are calling the upcoming tour, The End Of The Road. Indeed, it’s a massive three-year saga for the band–so what will they do to out-KISS themselves? Chuckling, Thayer thinks that’s a great question. “The obvious answer is, ‘Oh this is gonna be the biggest tour we’ve ever done!” but literally, I can tell it’s going to be the biggest one in terms of production and the show we do because of the amount time and focus we’ve been putting into this already!”

Starting from scratch with production and staging, KISS have been rehearsing for two months already, looking at pyrotechnic demos and fine-tuning the show with two or three months before they even start the North American stretch of this colossal live journey–so without giving it too much hype, it is going to be the biggest tour KISS have ever done. “A whole new thing for KISS,” says Thayer, “It’s just gonna be the bombastic show KISS has always been famed for!”

None of us is going to be around forever–a band like KISS is different to the [Rolling] Stones or Paul McCartney, even–KISS is a whole different animal.
[ Tommy Thayer ]

Is Thayer allowed to use the word “bombastic”? Is that what the kids are saying these days? Such is the extent of Thayer’s career, he kindly provides an education into the origin of his language. “In my old band Black ‘N Blue, we had a song called Bombastic Plastic–I’ve been using that word a long time and it really means something good and something powerful.”

You watch, that’s gonna blow up now and “bombastic” will be the next trend. Another word to hone in when you’re talking with KISS’ guitarist is “hype”. Thayer has used “hype” a few times in this conversation and there has certainly been hype, both positive and negative, in the commentary around KISS’ plans for The End Of The Road Tour. There’s been the odd critic, the odd observer, who have accused KISS of milking the cash cow or rehashing stuff etc. but for Thayer, given the longevity of the band it means an awful lot more to be a part of KISS in 2018.

“This tour is about the legacy of KISS, 45 years,” he says. “It’s a great legacy, and for Gene [Simmons] and Paul [Stanley] it’s even more important that for me and Eric [Singer], because those guys started the band. For me, I’m the new guy–17 years.”

To be the lead guitarist of KISS for that time, Thayer says is an honour and a privilege. Even now, he still says he’s living every kid’s dream. “How many kids in their parents living room, air guitaring, dreaming about being a rock star, about being in KISS–I’ve been living that dream as The Spaceman. It still boggles my mind, it blows me away. I’m happy to be a part of this celebration and I want to make it as great as it can be.”

KISS is timeless, the logo, the brand, the whole look, the imagery. That’ll always sustain itself. The thing that’s ending now for this band is being a touring band. I don’t think there’s any definitive plan.
[ Tommy Thayer ]

Thayer has the unique experience of covering all bases with the band–being a fan from the beginning, working for the band, then being in the band–he has a unique perspective that nobody else has. From having the best of both worlds, Thayer has become part of the shape of music that is not only universal, but spans generations–another mind-boggling reality for him. “I have to pinch myself sometimes, it’s like, too good. That’s not to say I haven’t worked hard in my life–having diligence and perseverance is important– t’s worked for me. It has happened. It has to do with staying in the game.

“I never looked at it like ‘I’m gonna be a big rock star, I’m gonna be in KISS’–I’ve heard some people tell their stories like that but I looked at it like, maybe I can have a garage band with my friends. I always focused on the things you might be able to receive in a few months. I never looked too far ahead.” The passing of time and the accruement of success over said time is what baffles Thayer.

Time is the ultimate constant, though. KISS march around those stages with heavy costumes, armour even, they command the stages, and if they were wearing jeans and t-shirts they might be able to reach their 90s doing this–but they don’t, so one would hope KISS have some failsafe against the ravages of age considering the tremendous amount of work over they’ll undertake in the next three years. “That’s the thing though,” begins Thayer, “None of us is going to be around forever–a band like KISS is different to the [Rolling] Stones or Paul McCartney, even–KISS is a whole different animal.

“There’s physicality to it that has to be there and honestly, where Gene and Paul are at, they want to do this tour now while they still can do it in top form even though they’re not getting any younger either, but we can still go out and kick some ass, though!

“Who knows what could happen in a few years–the wheels could fall off. But in rock music all these bands we all love and grew up with, everybody’s getting old, so bands have to decide what they want to do.

“KISS is timeless, the logo, the brand, the whole look, the imagery. That’ll always sustain itself. The thing that’s ending now for this band is being a touring band. I don’t think there’s any definitive plan.

What is definitive is there can never be a band on this scale, the showmanship, the music, the theatrics, there will never again be a band like KISS. “I always thought, from the very beginning, this was the coolest thing–especially at the beginning with the Clark Kent/Superman thing–what a great gimmick.

“The guys said at the beginning, they wanted to create the band they’d never seen before–it evolved and look where we are today, 45 years later. It’s a historic group, so this tour is gonna be important, the last chance to see KISS.” 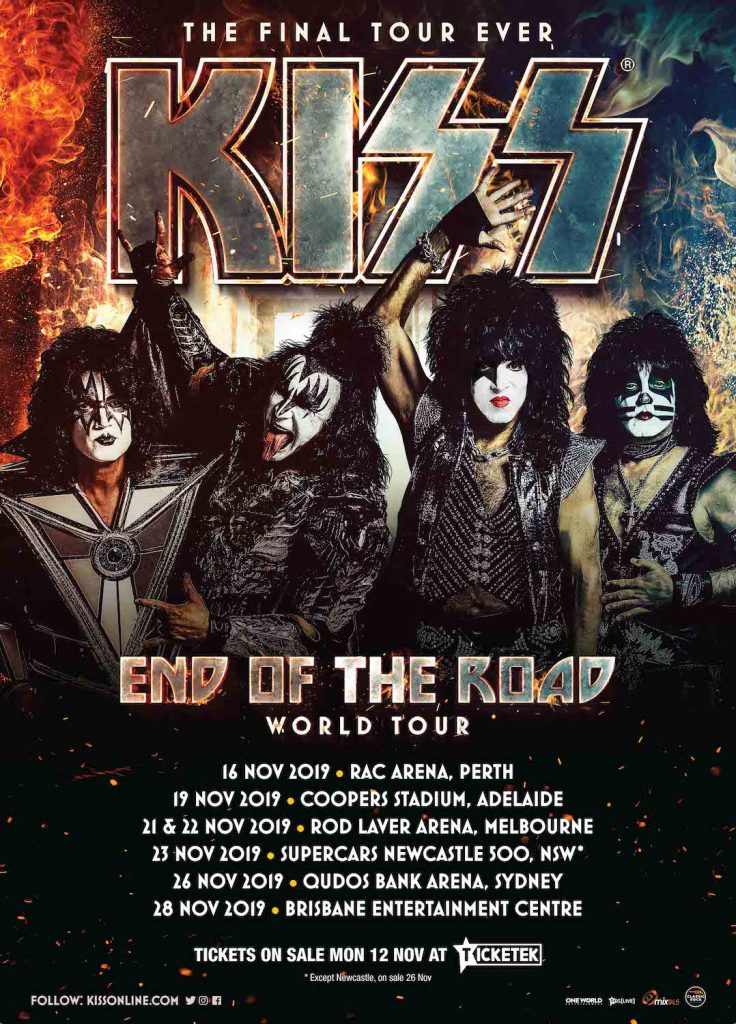