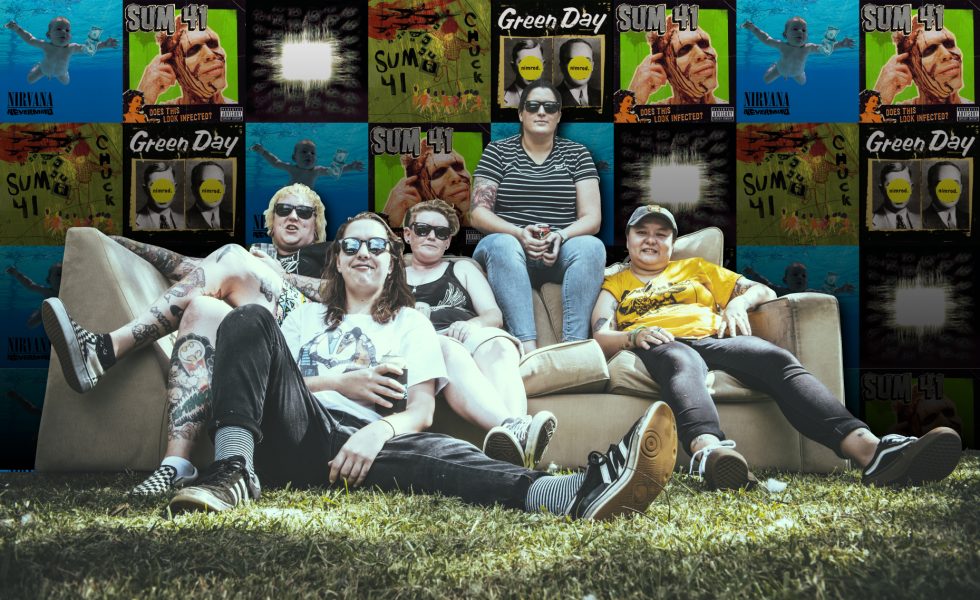 BEING JANE LANE // The Albums That Shaped Being Jane Lane

If you haven’t yet jumped on the Being Jane Lane bandwagon, now is a damn good time to do so.

Since making their explosive first steps onto the scene three years ago, the five-piece have been blowing minds left right and centre, dropping unapologetic punk rock tunes that would make many a music lovers “Best Of” list. But what would make the list for the girls in Being Jane Lane?

Before the band head off on their own headlining tour, Hysteria sat down with them to find out.

Nirvana’s Nervermind was a seminal album for me. People debate even today whether they were a punk band. But if you’re of the opinion that punk is an attitude and not a sound then these guys had it.

I first heard it on a tape my mum had recorded and I fell in love with the melodies and the ambiguity in the lyrics, as well as brilliant one liners like “Sell the kids for food” on In Bloom and “I’m so ugly but that’s okay cause so are you” on Lithium. The ferocity of belters like Smells Like Teen Spirit, Territorial Pissings and Breed spoke to the angry teen I was and made me feel like someone out there kind of understood my troubles.

It was this random and dark acoustic tune Polly that inspired me to nick my sisters acoustic guitar and try and do it for myself. For a long while they were the only band I would listen to, so it’s safe to say there are some elements of their sound that creep into Being Jane Lane.

When I was barely a teenager I knew who Green Day were. My friends and I were at an age where alternative music was beginning to stand out for us. In 1998, I was starting high school and my friend burnt me a CD (yes, for my Discman). That CD was Nimrod. I know that this album was not a huge success for the band’s punk rock fanbase, especially after Dookie, but as I was always a pop punk kinda girl this album just stuck with me. I’m not going to review every track, but songs five-seven (Scattered, All the Time and Worry Rock) are stand outs for me. Mike Dirnt is my favourite bass player and there’s just something about the writing of these songs that get me, even to this day. It was literally this album that made me pick up a bass guitar. I don’t think even most of my friends know that the music notes tattooed on my arm is the actual sheet music to Scattered haha.

The only negative thing I have about Nimrod is that when I finally bought my own proper copy of the CD, I would put it on to fall asleep to and it got really scratched and would just jam and get stuck on the instrumental Track Last Ride In, so I would wake up to it just playing this weird six second interval of the song and I’d have to get up and fix it. So that song is done for me. But overall it’s one of the few albums I can 100% listen to from start to finish and love every second of it whilst being filled with fun and stress free memories of being young!

The album that really made me fall in love with punk is Chuck by Sum 41. The album was probably one of Sum’s more heavier stuff (metal influenced) which my brothers and I had on HEAVY rotation. In the earlier days of Being Jane Lane, a lot of people were fascinated by how we’ve sort of incorporated punk with small bits of melodic metal riffs. I guess the impact Chuck has made on me really reflects how I’ve written in our band.

Majority of the songs on Chuck is just your basic four chord progression songs, but Sum 41 have somehow managed to make it such a dynamic and impressionable album to me. Dave Bakch’s riffs and licks takes all the songs to the next level and don’t even get me started on Derek’s lyrics. He’s an amazing songwriter.

When I was a teenager I loved grunge music, I think I learnt every Nirvana song on guitar! Then my dad gave me a CD of TOOL’s Aenima. I was sold, and that’s what inspired me to play the drums.

My favourite Punk albums would be The Shape of Punk to Come by Swedish band Refused. I was totally blown away by how different they were. I loved how polyrhythmic the songs were: it’s an insanely intense album.

Smash and Americana by The Offspring have always been other favourites, I remember singing at the top of my lungs with my friend as we rode our bikes to school .

Throughout my teenage years I really started to explore different types of music (not just your general top 40, although I really did love Avril Lavigne, and still kinda do). I started going to gigs when I was 14 and I really loved going to see Thursday, Finch, The Used, I Killed the Prom Queen and other heavy bands live.

After a while I found pop punk (emo) music and some of the bands that defined my teenage years were definitely Blink 182, Green Day, Foo Fighters, Sum 41 & Good Charlotte.

The album I absolutely loved was Does This Look Infected by Sum 41. Their fast guitar riffs, double kick and insane melodies made me really appreciate pop punk. I still really love this album and can still nearly sing every word. I feel as though my writing style with Being Jane Lane is very much driven by the kinds of music I love. I love really nice melodies but never stray too far from good old pop punk power chords and a nice catchy riffs. I always try to envision what it will be like to play live. It’s always been really important to me and the band that we put on really energetic live shows.

Catch Being Jane Lane at the following dates: