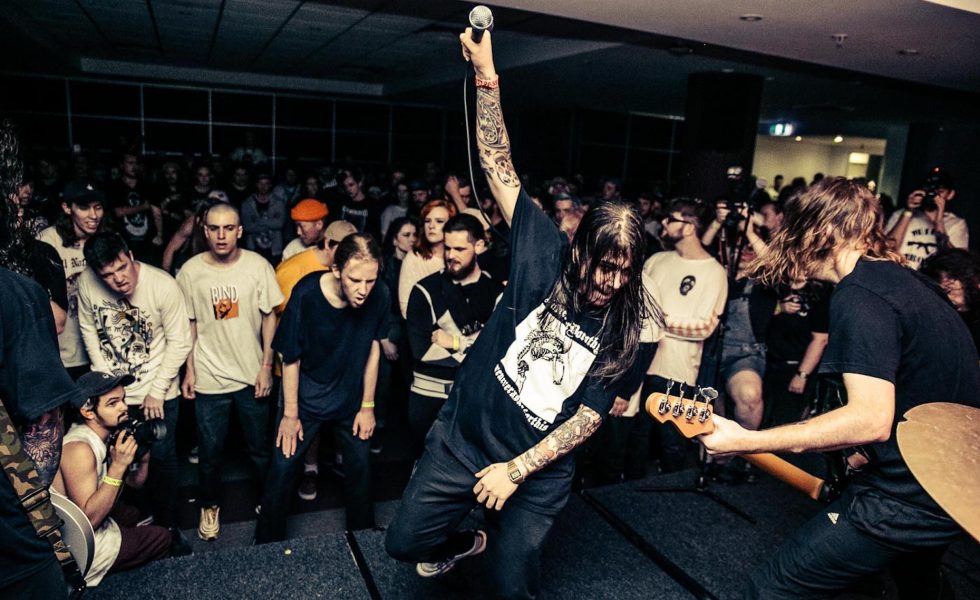 Getcha Nike TNs and your balaclavas: Invasion Fest 2K17 is upon us and someone’s gonna DIE IN THE PIT TODAY.

There’s a strong showing already at 1PM, which is promising considering we’ve got over 7 hours and sixteen bands ahead. The age range is another highlight; the amount of young’uns cracking open their first illicit packet of cigarettes for the day is a good sign for the future of the industry.

Aburden AKA Aussie Being As An Ocean kick off the proceedings with a raring crowd fighting for the mic. Although on record vocalist Mason Forster’s voice is a bit too AWstrayan for our tastes, here the spoken word has the edge taken off by singer/guitarist Kyle Burrows. They Say predictably sees the most energy; that sort of passion is a huge get for a young band. 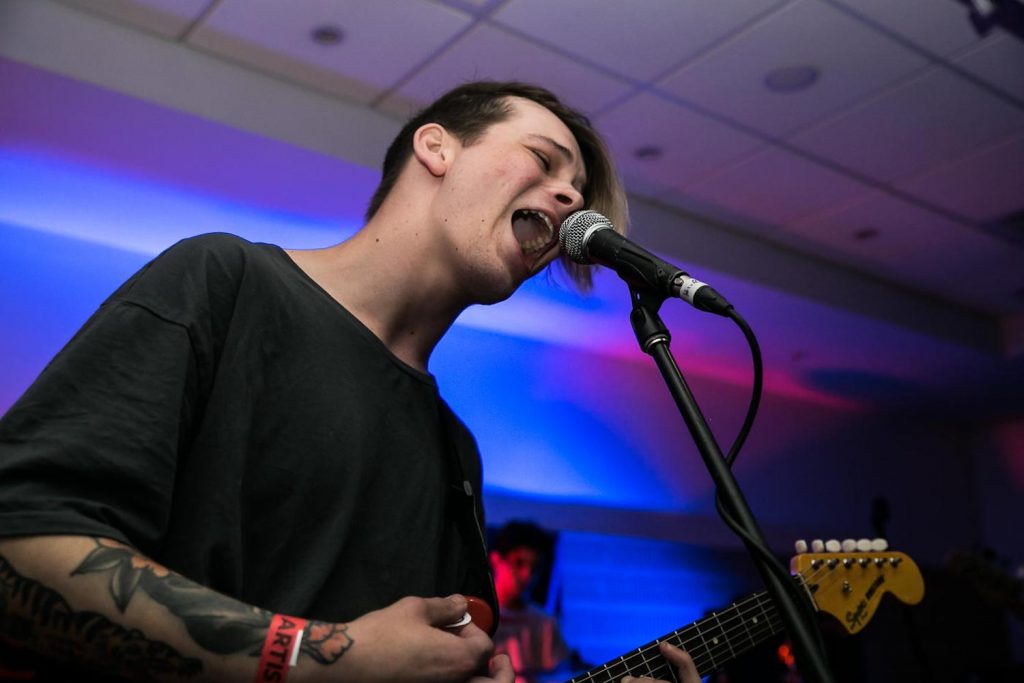 With a nice mix of polyrhythms, Sleep Talk are an early example of how varied this bill is. There’s time for huge breakdowns later (although they do pepper the set), but the swap from singing to screams is executed well and their drummer keeps it all in check. Ditto for Eat Your Heart Out, who are arguably the odd ones out for the majority of their set. Their pop-punk vibes sail through well though, and there’s still time for a slower pace here and there. When both return to these stages, they’ll have a whole legion to follow them. 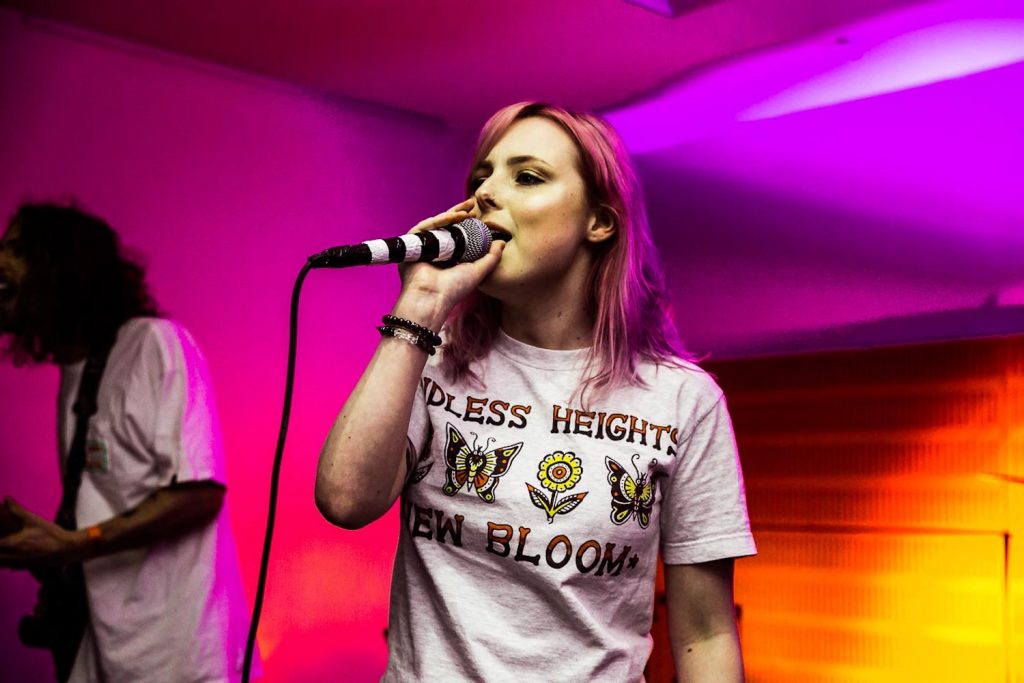 Eat Your Heart Out // By Bree Wallace

Honest Crooks are fucking insane. The joke of someone dying? Genuinely could happen here with the fury people are swinging. Kids are commando rolling into the sides of the pit; hefty dudes are running around the outskirts and literally beating people who dare to show their face at any point in the middle. Two guys even wrestle and slam each other on the ground. No clue what the hell is happening on stage because it’s almost entirely sludgy beatdown but it’s perfect for what the crowd want. Broken may have a smaller room and aim towards NY hardcore but they’re still a menacing act to catch. Cut You Off is a double fist raised highlight and Worldwide sees the pit finally split open properly (no vocals helps that along) which must be a welcome relief for the poor souls who were stuck in the awkward no man’s land. 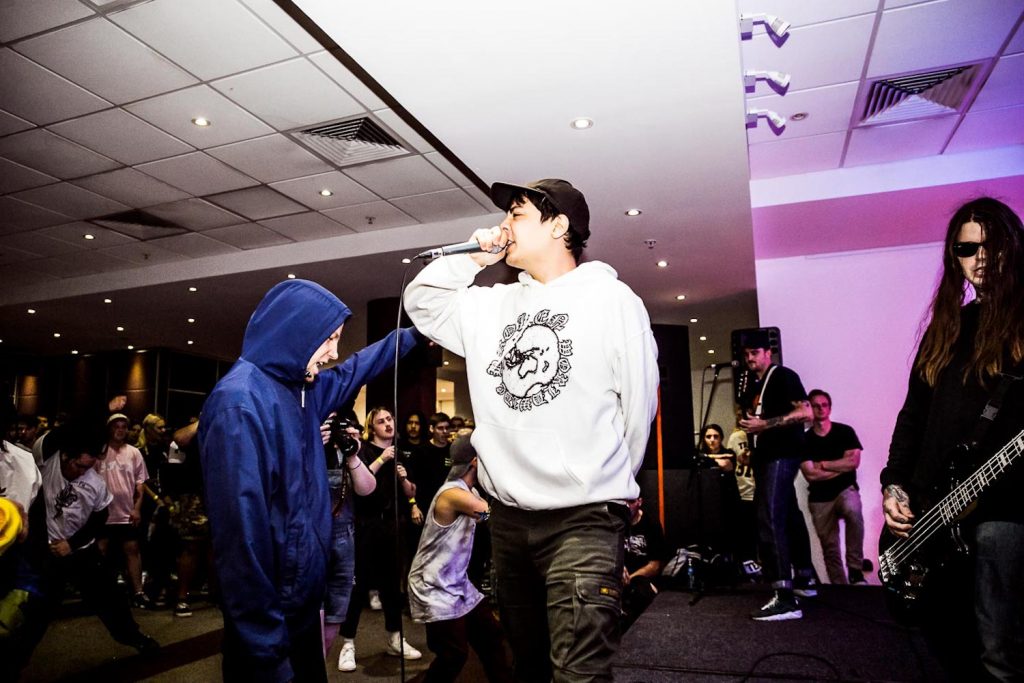 After the cracking pits of the past two bands, Deadlights are here to get the bounce back. Count it as the post-hardcore equivalent of doing jumping jacks to offset your weight lifts. Guitarist/singer Tynen Reibelt is the unique centre of their appeal: his piercing vocals hit just right. Vocalist Dylan Davidson requests us to ‘pulse’ with the band; it’s a bit hippy but with a simultaneous nodding of heads when the band rips into Attitude and Longitude they might have just swayed us. Invisible Hands is of course the peak, and it’s one of the first examples of unified clapping. It sounds surprising but people have been too busy windmilling to get them up so far. 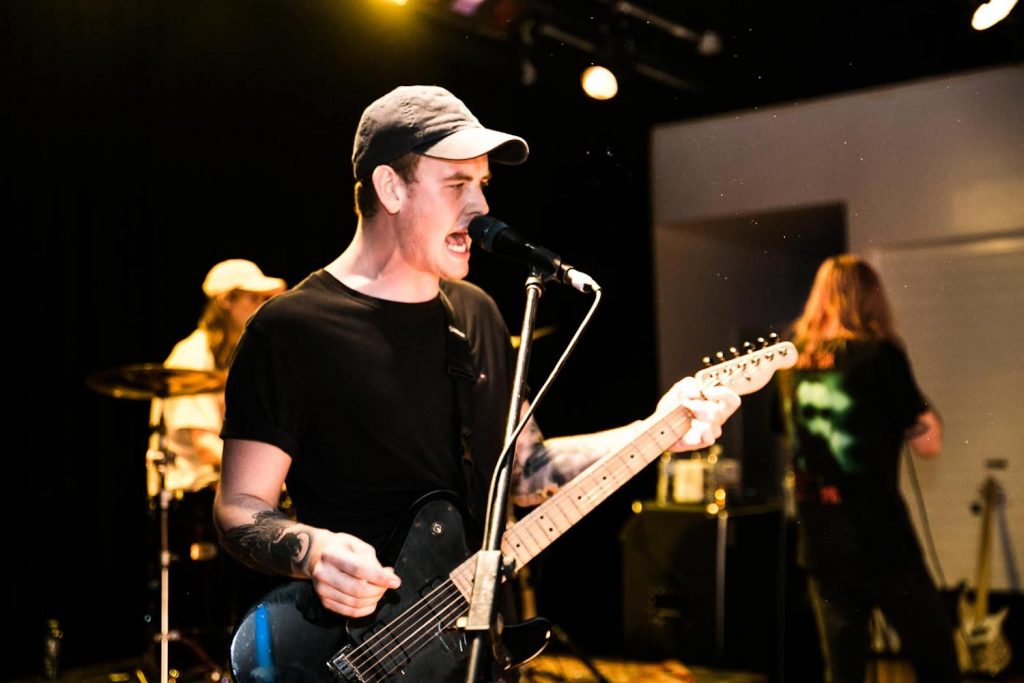 We’re thrown right back into that for Outright, who FINALLY inform us that they’ve got a new release coming out next year sometime. Frontwoman Jelena Goluza is furious throughout A City Silent and it’s always a fun contrast when she throws out a final guttural scream followed by a high pitched “thank youuu!” Harassment of women has always been an undercurrent of their work and in the current climate, it’s the perfect time for her to make sure everyone knows that women deserve to be treated with some fucking respect. The women in the pit are making sure that’s drilled into anyone around them with the punches they’re throwing just as hard as the guys twice their size. Plus Jelena tells us she threw a bag of dog shit at the last guy who harassed her on the street, so probably best to heed her message hey? 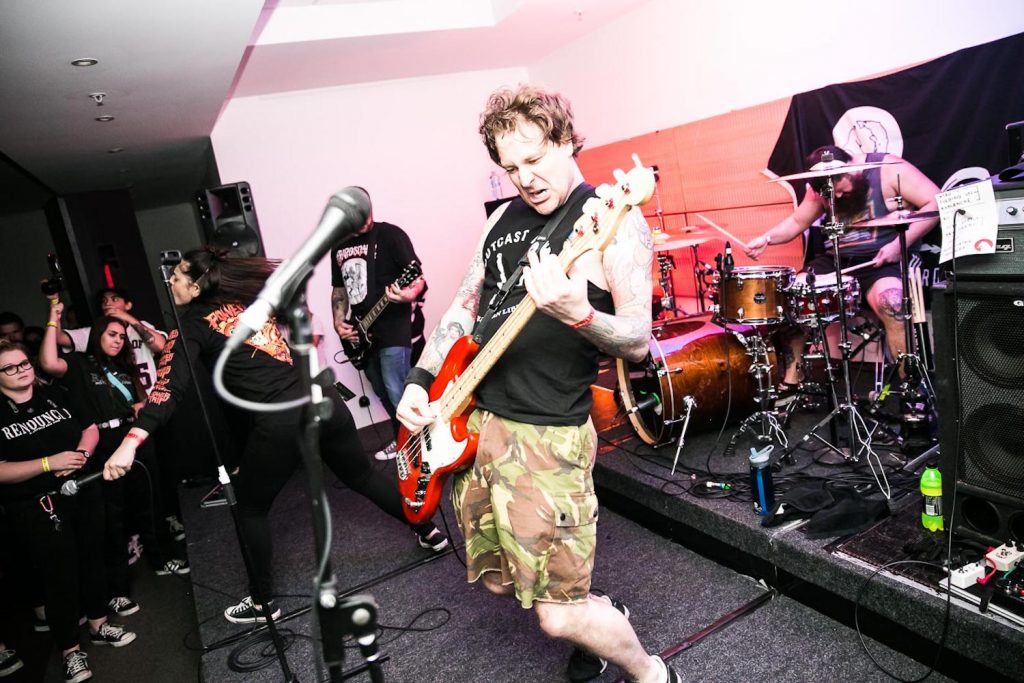 Geez if you weren’t on the Alpha Wolf bandwagon before this set, then it’s time to join the rest of Melbourne. Their drummer has a full-face mask on; guitarist Sabian Lynch’s own mask is safely donned so maybe the craze is still spreading? The front of the stage is absolutely jampacked and kids are climbing on top of the other kids to grab the mic. Opening with the gigantic Ward of the State it seems like the whole venue catch on to chant “MOTHERFUCKER”. Let’s be real: the majority of the songs we’re all just waiting for the crushing breakdown and they don’t disappoint. No.2 and Golden Fate; Gut Ache showcase Aidan Holmes’ vocal range and #104 smacks his low range around the head of the crowd. 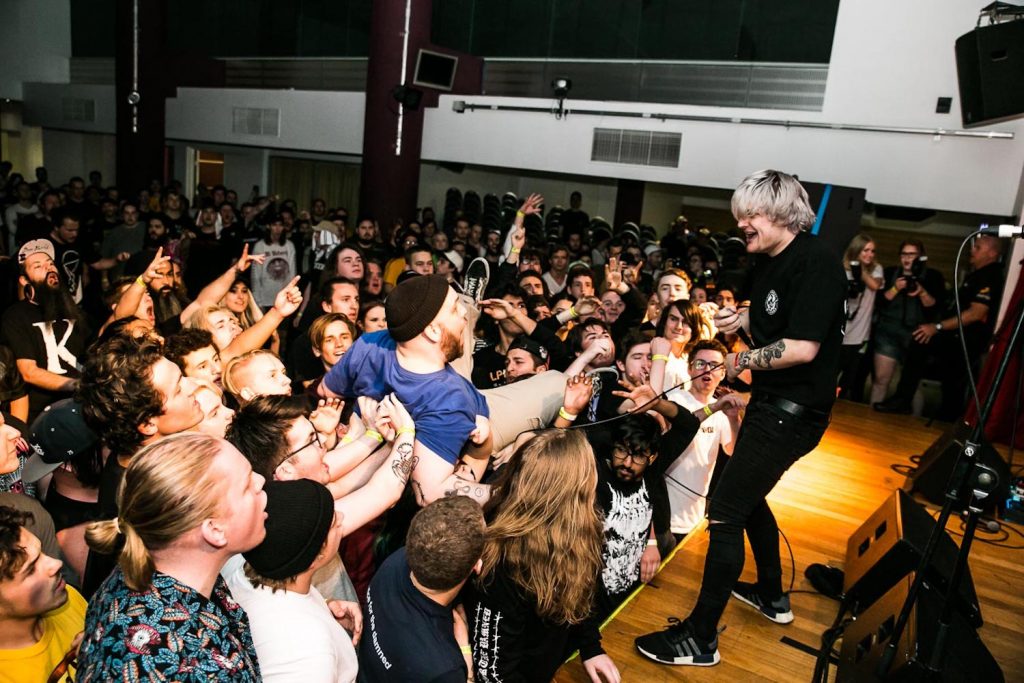 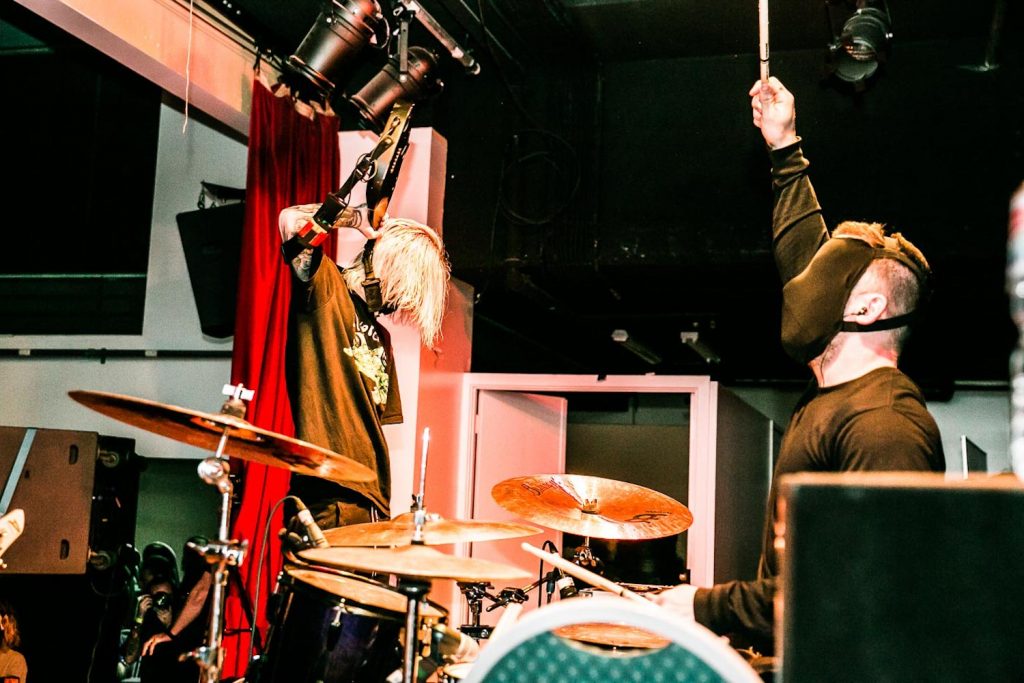 Stepson don’t fit in as well as they do at other shows here; anyone who’d be fans of them probably just wrecked themselves at Alpha Wolf and are taking a break up the back. This Is How It Feels and Never Mind Me are still the gold standard for crowd participation and there are still the dedicated few who are launching themselves up. Come With Me gives them the perfect opportunity to stand and sign which must be a nice respite for anyone who’s sending the year off with a bang. 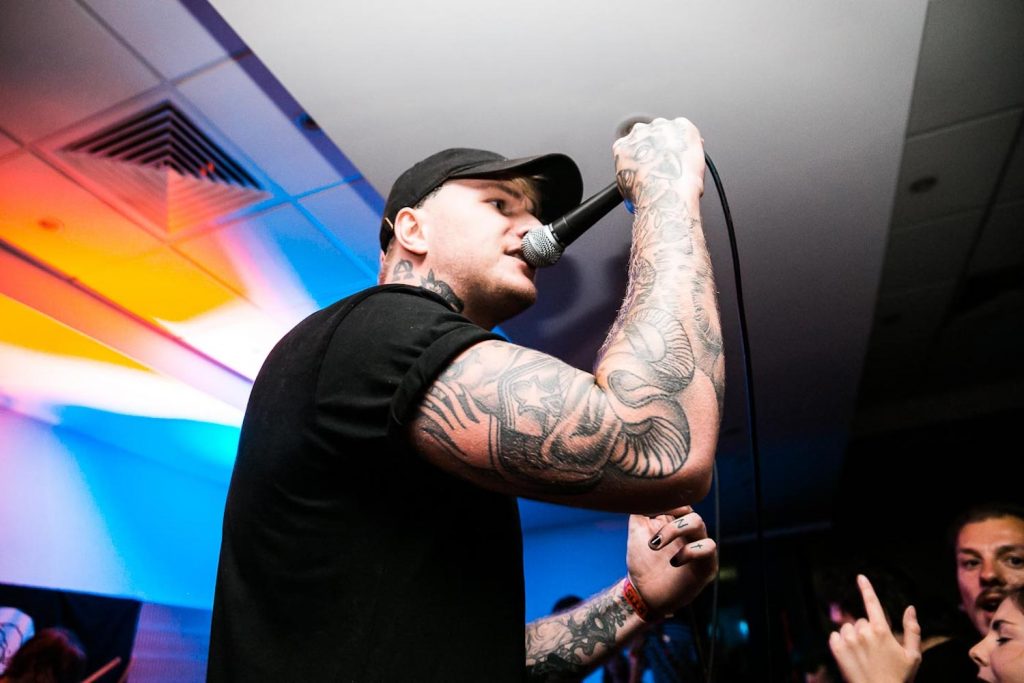 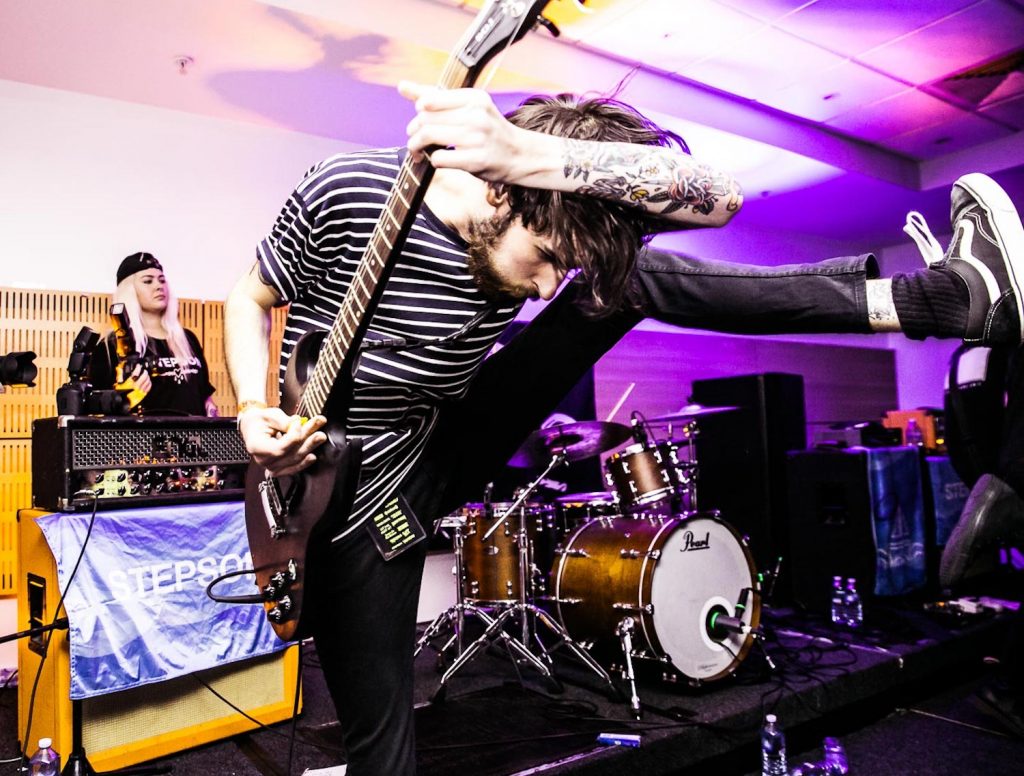 Not since Honest Crooks a few hours ago have we seen violence on the scale of Justice For The Damned. If what we’ve seen so far is a beating, Dragged Through The Dirt is a pummeling. Cursed Earth’s Jazmine Luders comes out for her feature on No Flowers On Your Grave that makes us wish she were a permanent member. Both her and vocalist Bobak Rafiee at the same time are the vocal equivalent of a tornado ripping through the harsh noise around them. Rafiee takes his time on stage to call out people in the room who talk shit on the Aus alternative crowd: “take a fucking look around you; the local music scene is NOT dead.” YES go on GIT em Bobak. Anyone watching Please Don’t Leave Me and the genuine appreciation from both crowd and on stage wouldn’t believe the shit-talkers anyway. 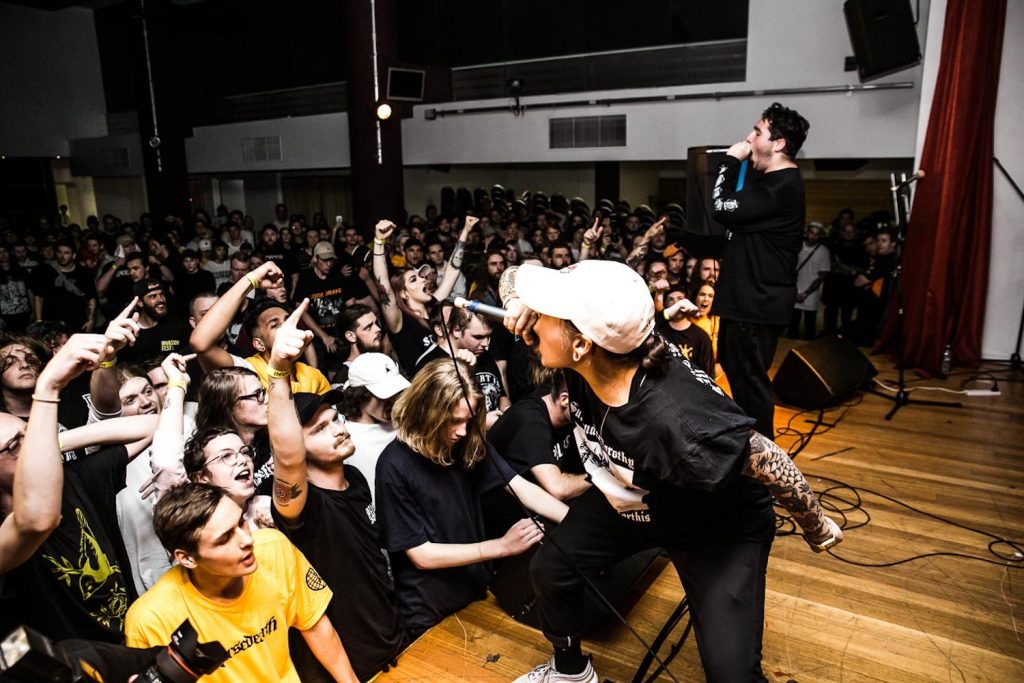 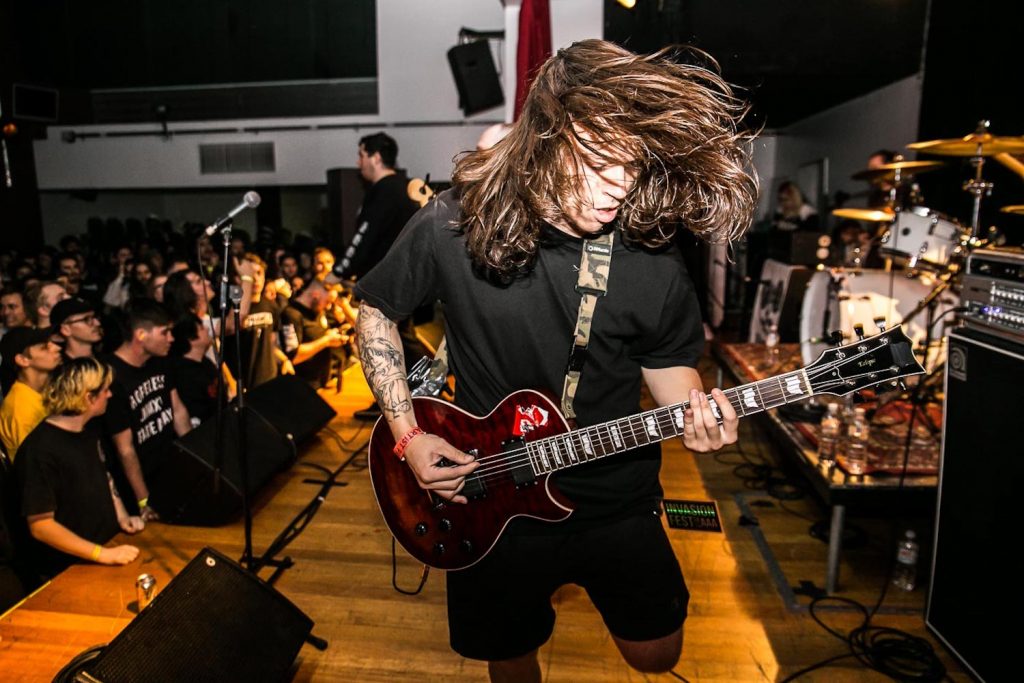 Justice For The Damned // By Bree Wallace

It’s getting late in the day and the crowds for Reactions and Void of Vision are starting to thin. The former struggle moving to clean vocals for Wrong Direction but slip comfortably into hardcore easily enough. It’s a shame because that track has the potential to make waves across the world. For Void, Invasion Fest isn’t a strange place to be. Ghost in the Machine rips people from their apathy on the sides; vocalist Jack Bergin ends the set by sailing on top of outstretched hands. It’s guitarist Matt Thompson’s final ever show and he performs an admirable job on vocals during Sunrise. 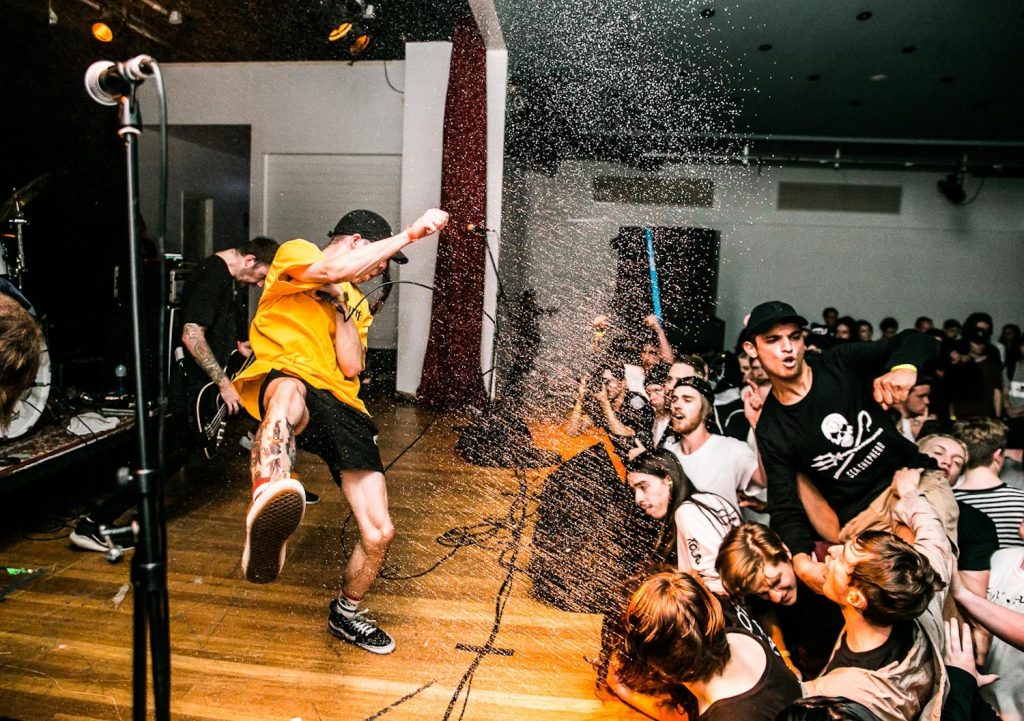 Void Of Vision // By Bree Wallace

Cursed Earth are a lot. The smaller stage is so overcome with bass that it’s genuinely exhausting listening to their set. Maybe it’s band fatigue too but compared to Justice who let up at points, Cursed Earth are relentless. Luders is in scorching form though and everything is somehow kept in time. It’s a mark of how disciplined they are because if we can hardly keep track, then they must be on some telepathic level. 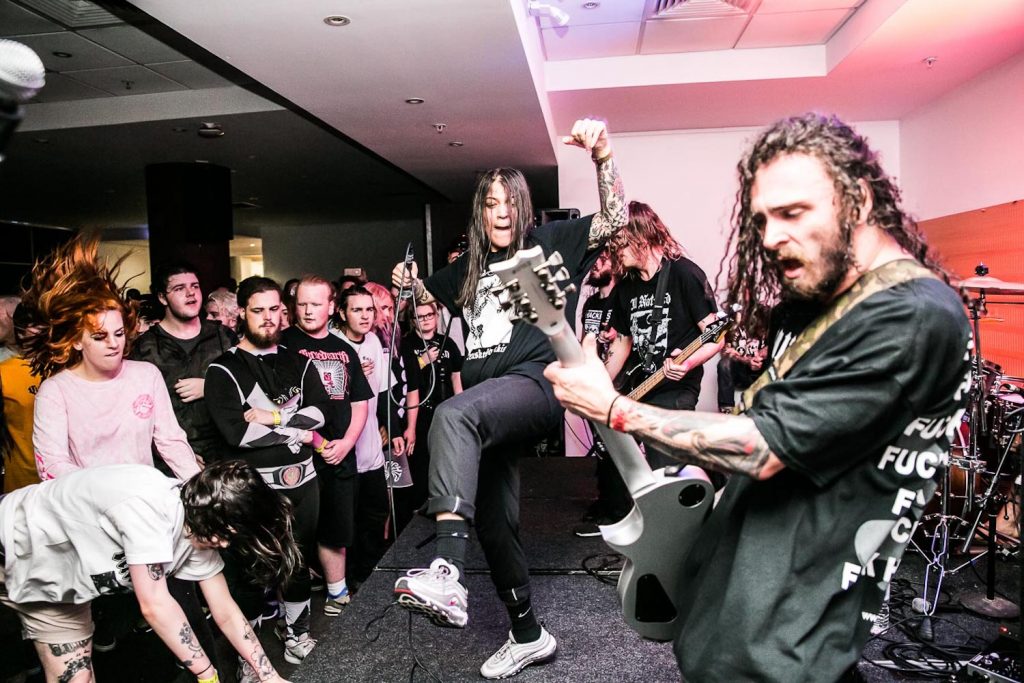 We’re at the business end of the evening and first international Kublai Khan arrive to a warm reception. How these people in the crowd are STILL thrashing around after an entire day is a mystery but they’re pushing through when The Hammer drops. Vocalist Matt Honeycutt stalks the stage with a menace that years of touring have honed; he shows his vulnerable side though too with a dedication to his mother he never got to tell his appreciation. We didn’t come to Kublai to feel but fuck he’s made us want to cry-punch. The band is liberal with their mic grabs and one photographer looks like he’s having the time of his life as he takes the stage for a feature. 8 Years is still as emotionally crushing as ever, and Belligerent elicits cheers. 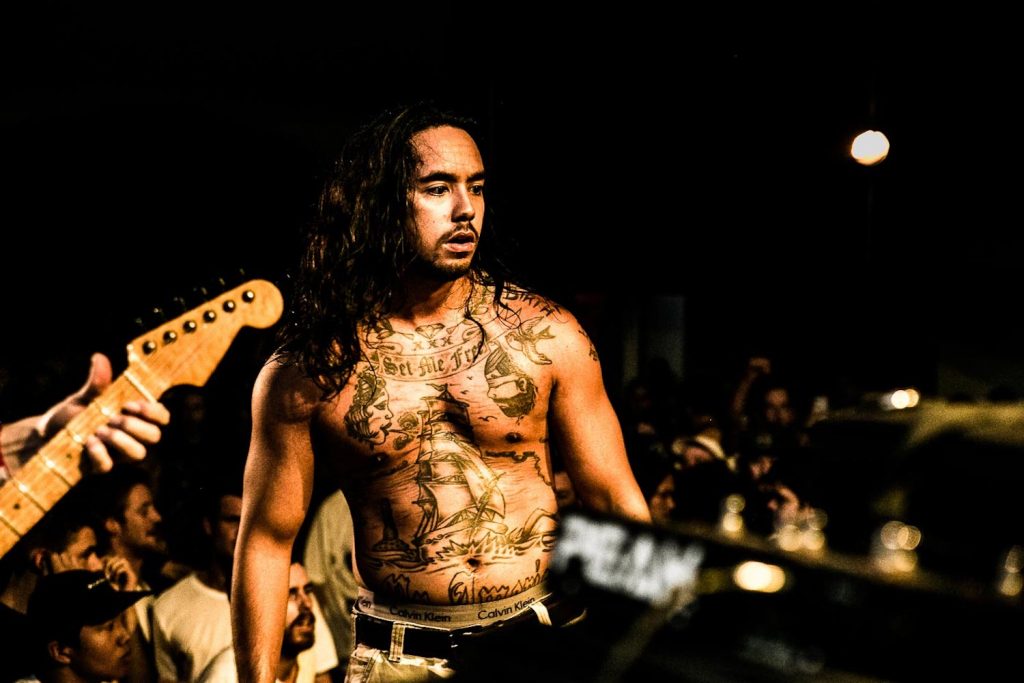 Again, maybe it’s the stage at the tail end but Endless Heights just don’t feel like they’re clicking. Singer Joel Martorana has an impressive voice but he refrains from pushing it when the music crescendos in tracks like opener You Coward. It’s frustrating because we’re almost leaning in to hear him while the guitars reach a fever pitch. Newest release Come A Little Closer suffers from the same issue, even if the rest of the band do keep us vibing. A larger room to let the acoustics echo would suit them even better; at least old favourites like Drain and Teach You How To Leave still go off. 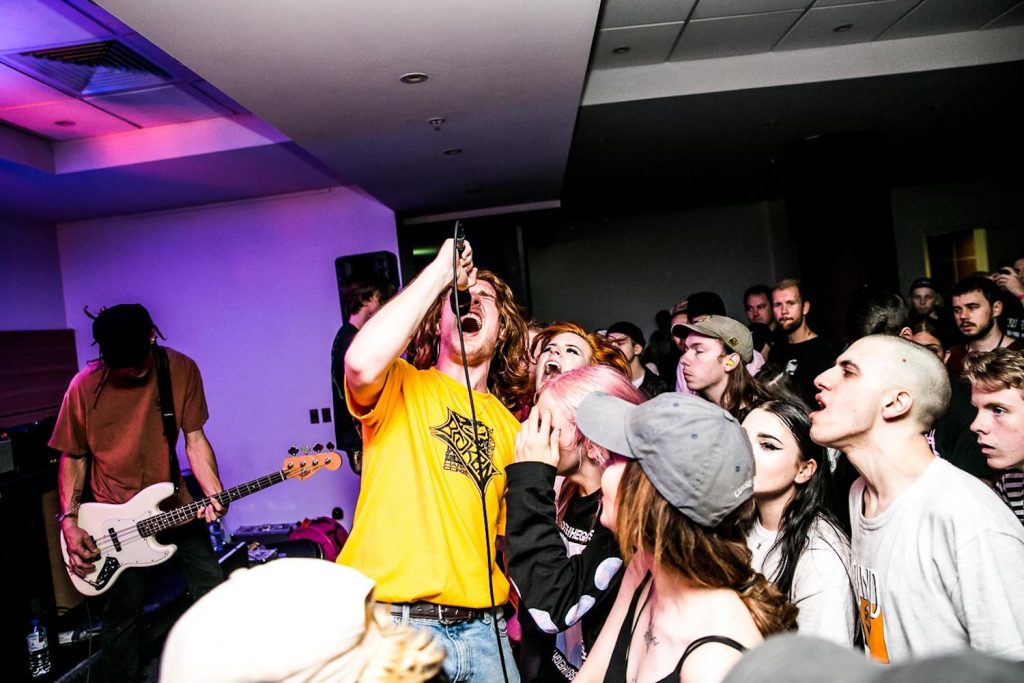 As the final act, The Acacia Strain show why they’re the biggest pull for the evening. Unbridled on what must be a tiny stage for them, vocalist Vincent Bennett is ferocious in his delivery. There’s something about deathcore vocalists and having the best personalities in the industry, and Bennett is no exception. His charisma shines on through when he pegs water bottles into the crowd and informs everyone who’s mic grabbed so far “I’ve got a cold so I guess you’re shit out of luck. Apparently his favourite tracks are Christmas songs, and the rest can get fucked. We even sing our own version of “Santa Claus Is Coming To Town” which is entirely made up of repeating “You better watch out!” in rhythm. Beast brings us right back into the swing of things, and they drop fucking Skynet out of the blue which has people losing their everloving minds. 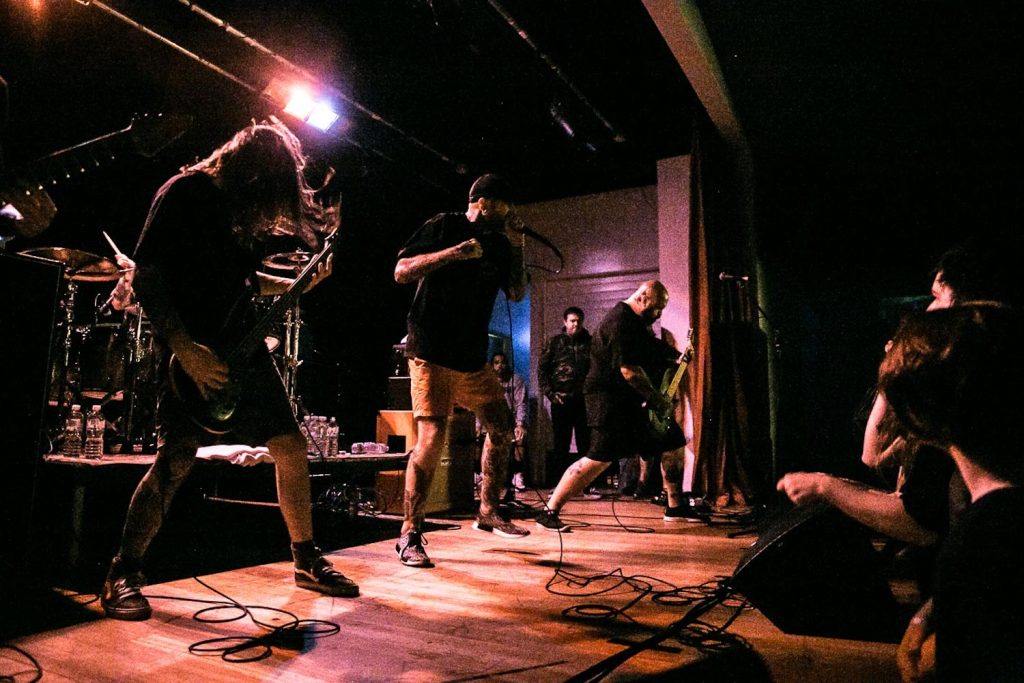 The Acacia Strain // By Bree Wallace

Invasion Fest was a marathon; however, the exhaustion is worth witnessing the huge amount of talent Australia’s produced recently. With both Invasion and Unify selling out, it’s safe to say we’re entering a golden age for the local scene.