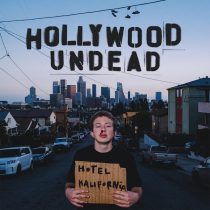 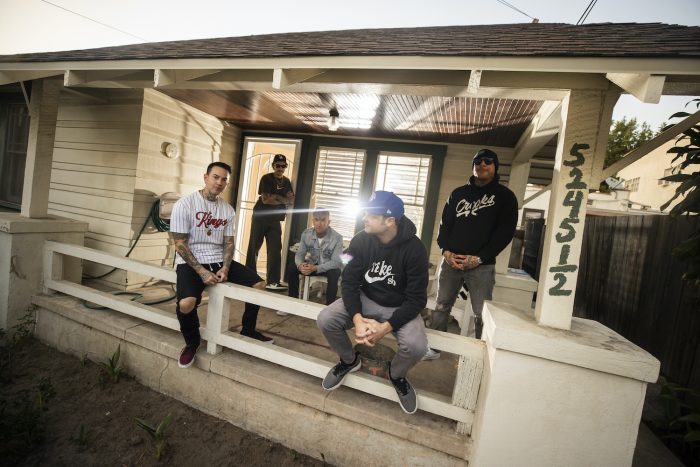 Never ones to hold anything back, the formerly masked unit known as Hollywood Undead have spent years exploring every inch of industrial hop hop, punk and beyond since first forming in Los Angeles in the mid 2000s. With seven albums already under their belts, from their 2008 debut Swan Songs to 2020’s New Empire Vol.1 and New Empire Vol.2, the band have remained steadfast in their raw and riotous brand of rock, with their brand new 2022 venture Hotel Kalifornia cementing not just their firm devotion to their stylistic niches, but also their unwavering nod to their own personal upbringings “bred in the gutters and back alleys of Hollywood”.

An ode to poverty, hardship and the increasing separation between the haves and the have-nots, Hotel Kalifornia staunchly wears its messaging on its sleeves throughout the album’s 14 tracks; but there’s also a marked stylistic expansion up for grabs with the group striving to adhere to their mission statement of developing with every new release. Coming in swinging, Hotel Kalifornia erupts with its standout opener CHAOS; a fiery nu metal party-starter that shifts between punk flair, electronic hip hop and soaring anthemics. Nearly three songs in one, CHAOS is a clear snapshot of Hollywood Undead’s love for maximalist swagger, while also marking Hotel Kalifornia’s heaviest moment in a long while. A love for all things genre-less continues with the metalcore bounce of World War Me, industrial EDM on Ruin My Life, pulsing punk on Hourglass, upbeat moments on City Of The Dead, and crunkcore on the menu via Go To War.

Hollywood Undead remain as one of the most eclectic jack-of-all-trades kicking around in the modern music scene.

Continually parting the veil lyrically on the band’s shared experiences, hanging out with gangbangers and drug dealers in the backstreets of Hollywood, California before bonding together over music and mutual heartbreak, the Hollywood Undead backstory isn’t entirely something new for fans to behold. But on Hotel Kalifornia, we dive a little deeper and strike a little sharper than previous releases, and there’s a renewed sense of urgency and emphatic delivery seen in particular on many of the album’s lead singles, including Wild In These Streets and Trap God. While some of the more bombastic moments lying in wait on Hotel Kalifornia may detract from the group’s ultimate overarching themes for some, the welcome nods to snippets of the band’s earlier works alongside their modern textures buoy the overall experience, with the group routinely finding their groove and leaving sonic bodies in their wake right up until the pop stomper that is closing track Alright.

Teaming up with producers Erik Ron, Andrew Migliore, and Drew Fulk on Hotel Kalifornia has significantly bolstered the Hollywood Undead of old, with the group rising to the challenge of forcibly expanding themselves without sacrificing their ultimate creative core. Longtime Hollywood Undead fans and those with a penchant for hooks and genre-defiance will find a lot to like throughout this ardent offering, while more casual listeners may struggle to latch in as easily. Regardless, Hollywood Undead remain as one of the most eclectic jack-of-all-trades kicking around in the modern music scene. Forget what you think you know about Hollywood Undead (masks included) in 2022 and give Hotel Kalifornia a visit.

STANDOUT TRACKS: CHAOS, Wild In These Streets, City Of The Dead

STICK THIS NEXT TO: Linkin Park, Falling In Reverse, FEVER 333