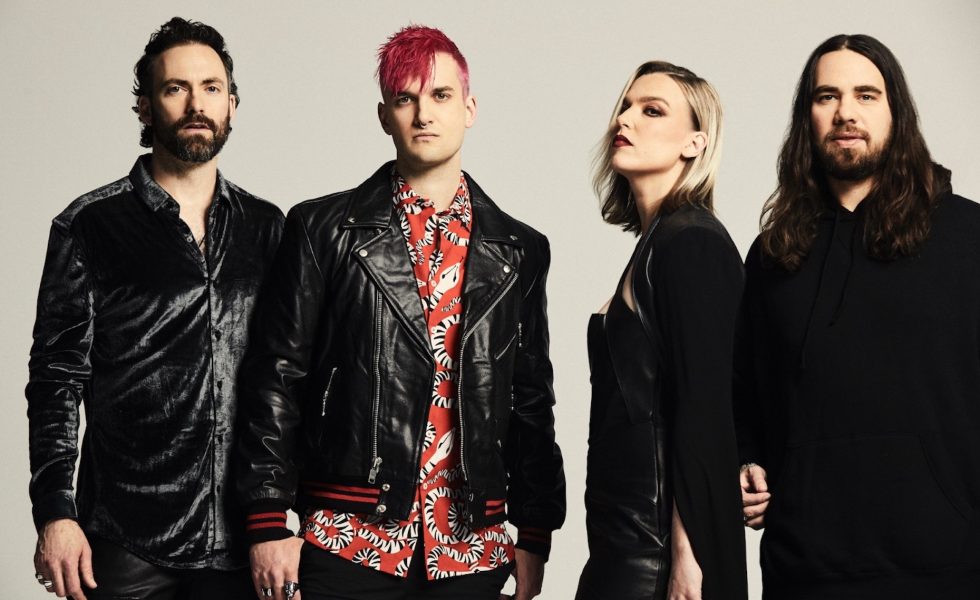 A (hale) storm is brewing for early 2023, with Grammy Award-winning American rockers Halestorm set to whip up a frenzy of rock’n’roll down under in February next year.

Following years of rescheduling and cancellations, Halestorm are hungrier than ever to continue bringing their iconic and electrifying live show to the masses. Armed with their recent album Back From The Dead and with Canadian rockers Theory of a Deadman, aka Theory, also along for the ride, these shows are set to more than make up for years of missed mosh pits and living room headbangs; and these shows, which will also include an Auckland appearance in late January, are just as exciting for the bands set to appear onstage as it is for the crowds, as Halestorm vocalist Lzzy Hale revealed recently to Hysteriamag.com.

“You have no idea, we are so excited,” Hale enthuses. “This has been something that we really wanted to do, and then everything shut down. And then we had to cancel and then reschedule – but it’s finally happening!”

“I feel like by the time we finally get over there, it’s going to be just madness in the best way because we’re gonna have these shows and I feel like everyone’s gonna black out from excitement,” Hale laughs. “We’re all very into it, and it’s weird because even now we’re starting to plan stuff like what we’re gonna wear onstage. We’ve still got some time, but we’ve been having those conversations with me and the guys. We’re just far too excited to go!”.

Even the impending lengthy plane ride on the cards for Halestorm hasn’t deterred the group’s excitement, and the prospect of finally playing in Australia again has also made the band think outside the box regarding their upcoming setlists.

“What we’re planning on doing,” Hale reveals, “because we know there’s a lot of people who will be travelling from show to show, just because we haven’t been there in such a long period of time … we’re gonna absolutely play all the things that we’re known for and everything like that. But as far as the new songs go, we’re going to be playing a different set each night. We’re gonna be switching it up and just try to give everybody everything we absolutely can.”

“Because we owe you guys that,” Hale laughs. “It’s been too long. So we’re gonna lay it all out there. But the new songs have been absolutely amazing live out here in the States. And obviously you guys have a culture of rock’n’roll across the pond.”

I just started getting into the audiobook thing, and me and my partner are listening to them like an old couple right now. We just sit on our porch listening to audiobooks, that’s what real rock stars do, by the way.
[ Lizzy Hale – Halestorm ]

For Halestorm, and certainly bands across the globe, returning to stages has been a long-awaited homecoming. And it’s equally been something fans have relished, with the pandemic years bonding fans and artists in unexpected ways.

“That’s what we’re seeing now,” Hale muses, “everybody’s out and everybody comes to the show, and it’s almost like the audience levitates. It’s like this survival thing, like: “We did it! We made it! We’re here, we’re back in our happy place”. That’s been the common theme here at our shows lately. But I just can’t wait to come over and see the reaction with all of you.”

With tours later this year alongside Alter Bridge, and appearances earlier in the year at Aftershock Festival, shows with the likes of The Pretty Reckless and others, and their own headline shows, the return to touring for Halestorm was inevitably a staggering moment, particularly for Hale who has been part of Halestorm since her early teens.

“It absolutely was an out of body experience,” Hale shares of the first Halestorm show back post-pandemic. “The weirdest thing was … I’ve been in this band since I was 13, and there’s always been a little bit of excitement but also nerves that happen about 10 minutes before you go onstage, you just get sharper. It was that particular feeling that I always have, but it was 10 times greater than before.”

“And that feeling started not 10 minutes before the show, but during soundcheck, I was like: “This is real. We’re actually soundchecking for a show, we’re having a show tonight”. And then as soon as the lights went down, I was like: “Can we do this? I don’t know?!”. We’d rehearsed, but jesus … it was just really cool. It was just one of those very much “living in the moment” type situations where you’re just not thinking about any mistakes you might make, you’re just in it with the audience. And it was a beautiful thing.” 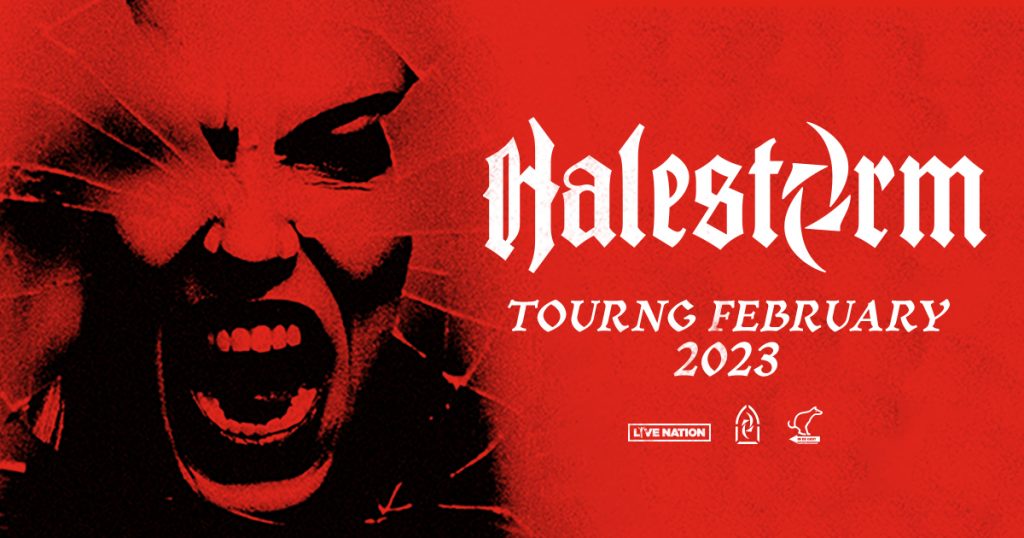 “I found too, you don’t realise how much of that is used as weapons in your arsenal, especially for someone like you or me, or anyone who has been doing the same thing for a long time, it becomes part of your identity. When that goes away, you’re like: “Well, who am I? What am I supposed to do?”. There’s no mission statement for this. It’s just nice to be back where we belong. But it’s interesting because I’ve had to learn other ways of dealing with some of those issues, whether that be combating depression or anxiety, all of that, without the band, and without the little shining light to say: “Oh, this is who I am”. It was hard to do that. But the silver lining is: I think if the world hadn’t stopped, I never would’ve taken the time.

“During the pandemic, I was like: “What am I gonna do?! I have to create hobbies now,” Hale grins. “It’s like looking at yourself in the mirror, and I reverted back to pre-Halestorm, like 12 year-old Elizabeth, not Lzzy from Halestorm. And I’m like: “Who is this person!?”

The 2023 Halestorm shows will certainly not be the band’s first Australian rodeos, and Hale has a large quantity of particularly memorable Aussie moments from her previous visits down under (and, as she revealed, plenty of stories with some friends in high places who happened to be in town at the same time).

“I have two favourite Australian memories,” Hale enthuses. “The first one, I was hanging out at Cherry Bar, and it happened to be a night where everybody was in town. I was hanging out with Jerry Cantrell, Kerry King and Tobias from Ghost, we were all having a beer, and we were all doing separate shows, Halestorm were doing a headline thing and the other guys were doing some festival gigs over here.”

“But it was so crazy, we hadn’t seen each other in years, and we all just had these really weird conversations. Kerry and Jerry just had a ton of stories about hanging out in the 90s and during the LA riots and all of that. That was an extremely memorable moment.”

“A more devious moment in Australia came on a day off in one of the cities, I think it was Melbourne? And we’d started gathering, I don’t know, “collecting” strangers. We met these two girls at a bar, and they were like “Oh, we’ll show you some bars to go to, come hang out with the locals”. They knew we were in the band, and then they started telling people at the bars that we were the band. At the end of the night, this is at like 4:00am, we’re crawling back to our hotel, after many drinks. And instead of everybody saying goodbye, everybody just kind of followed us up to our floor and our rooms, and we didn’t go to bed until like six in the morning! But that’s the way it is over there, you just meet some friendly people. You have a good time,” Hale concludes, laughing.

Ahead of heading down under, Hale still has a few months to plan her stage outfits and setlists; but she also has some time to prep what she’ll listen to on the long plane ride from America, which leads her into revealing her inevitable creative process that can stem from listening to music while travelling, as well as latest listening obsession.

“It all depends on my mood,” Hale reveals about her listening habits on long plane rides. “Sometimes I’ll download some shows, but then I’ll get bored and I’ll listen to music. And then I’ll be inspired by the music so I’ll get out my notepad and I start writing things down.”

“I actually do have a recommendation as well, I just started getting into the audiobook thing, and me and my partner are listening to them like an old couple right now. We just sit on our porch listening to audiobooks, that’s what real rock stars do, by the way,” Hale laughs. “It’s called The First Law and it’s by Joe Abercrombie, it’s like seven books, but they’re so good! There’s one guy doing the narration, and I’m not kidding, there’s like 27 or something different characters and he does them all beautifully and separately. It’s really cool.”

With her recent exploration into the world of audiobooks, is a Halestorm audiobook potentially ever on the cards? Hale certainly isn’t writing off the possibility entirely.

“That would be awesome, I would be totally down with that,” Hale declares. “We’re coming out on Halloween with a graphic novel, it’s this comic book kinda thing. I’m also still trying to compile, not necessarily my life story, but my life when Halestorm started up until now. It’s a couple of different lifetimes, and it’s really hard to get done. My teenage years are as far as I’ve gotten up to, I haven’t even gotten to my 20s yet!”

Halestorm will be headed to Australia in early 2023.