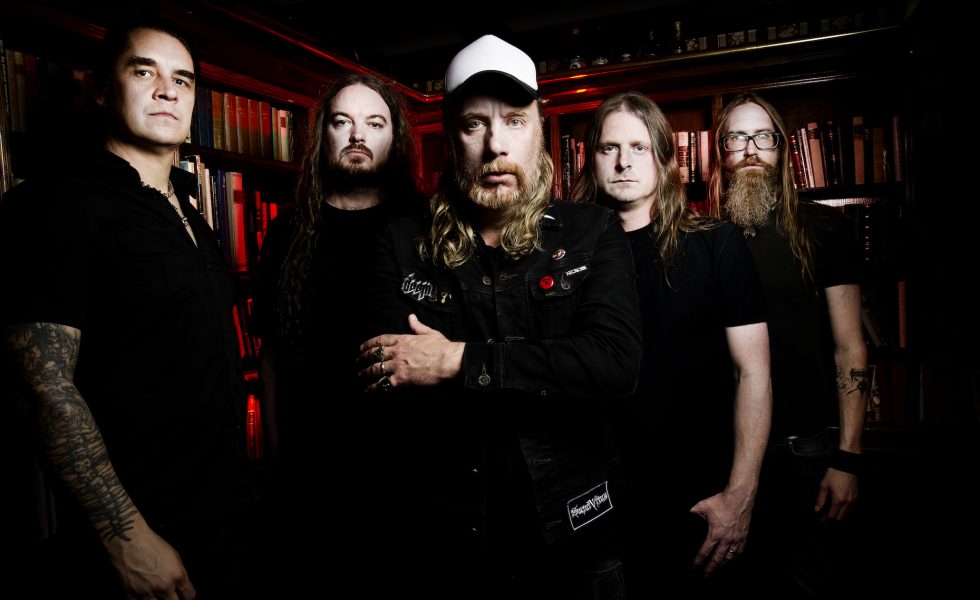 AT THE GATES // To Embrace The Future Itself

Few names invoke as much majesty in the world of melodic death metal than Swedish veterans of the Gothenburg sound, At The Gates.

Very soon, the band that created influential albums such as 1995’s Slaughter Of The Soul will set foot on Australian stages alongside fellow Swedish extreme metallers The Haunted and Witchery.

Last time At The Gates came to Australia was in support of At War With Reality [2014], an album that marked something of a comeback from an extended hiatus. This time, they arrive in support of To Drink From The Night Itself, their sixth album, released almost a year ago, and the new songs have been making waves with both longstanding and more recent fans. “It’s always super exciting to go to Australia” guitarist Martin Larsson says, “and I’m super excited to go to Tasmania for the first time. That’s a new one for me.”

At The Gates will indeed hop the Bass Strait to play a special show in Hobart. What can we expect from this first-ever Tasmanian At The Gates set? It will be something for everyone it seems, as Larsson outlines, “It will be a good, solid mixture I’d say, between new stuff and a little bit older stuff, maybe one or two really early songs, but mostly stuff from Slaughter Of The Soul [1995] onwards. I feel like the set we play now … I feel like it’s a solid set of good songs that blend well together.”

To Drink From The Night Itself was something of a forward-looking album for the longstanding band, formed in 1990. Larsson notes that bringing in new aspects to At The Gates’ iconic sound was both exciting and challenging. “You know” he states, “as a band you have to keep things interesting, for yourself, and so we tried to branch out a bit from what we did before, every time we do something, but you know, that’s the tricky part, looking forward but retaining the core of what you’re doing, the essence. But I feel like we succeeded this time around, also and we’re starting to look forward to another album now, and I think some of the new things we did on the last one, I think we are going to stretch further the next time round. We’ll see what happens.”

In a strange way it was kind of exciting for us, having to win over someone else’s audience, but we were very well received and very well taken care of.
[ Martin Larsson ]

A new album is in the works … how exciting! On whether the writing process is already underway, Larsson suggestively offers, “we’ve started a little bit, we’re playing a lot, we’re travelling and touring a lot so we don’t have a lot of time but trying to make use of the time we have so we’re a few songs into the process, no finished songs, a few sketches, and its always good to start creating, it keeps it interesting.”

This will be the first time Australian fans will see the new At The Gates lineup, for To Drink From The Night Itself also introduced their new guitarist, Jonas Stålhammar to At The Gates’ discography, as he joined in the later stages of preparing the album. Has the writing process been different this time with a new member? “Well it’s still a little bit early to say,” Larsson reflects, “it is still mostly Jonas [Björler, bassist] ideas so far that we kind of just swished around and tried, we haven’t played any stuff as a band, so it’s a little bit early to say, but shortly we’re going to have a little bit more time at home to start really looking forward, so we’ll see what happens.”

At The Gates have been really shaking it up with touring in the last year, having recently finished a United States tour with Behemoth and Wolves In The Throne Room. This seems like a very different mix of bands than At The Gates has usually toured with, and as Larsson explains, this has been refreshing. “It was different for us,” he recounts, “because we haven’t played support … since the nineties [laughs]. In a strange way it was kind of exciting for us, having to win over someone else’s audience, but we were very well received and very well taken care of. We have just announced another support tour in the U.S., coming this autumn, with Amon Amarth and Arch Enemy. You know, we’ve been doing this for a long time … but you know you always want a challenge, so we tried it differently this time.”

This time At The Gates is coming to Australia with very familiar bands, The Haunted and Witchery. There are a few common members between these bands, as the connections are recounted, such as At The Gates bassist Jonas Björler and drummer Adrian Erlandsson also in The Haunted, and The Haunted’s guitarist Partik Jensen also playing with Witchery, Larsson laughs, “Oh yeah, this is more like a family tour.”

Does that make it easier or harder? “Um, I don’t know,” Larsson laughs, “I suppose you’d have to ask our drummer, I’m sure it’s a challenge for him, but for me it’s a pleasure … I’m pleased and grateful that I get to do this, to see Tasmania, and meet the people, so I’m just really pleased to come out and have the chance to see you all.”

Catch At The Gates with The Haunted & Witchery at the following dates: