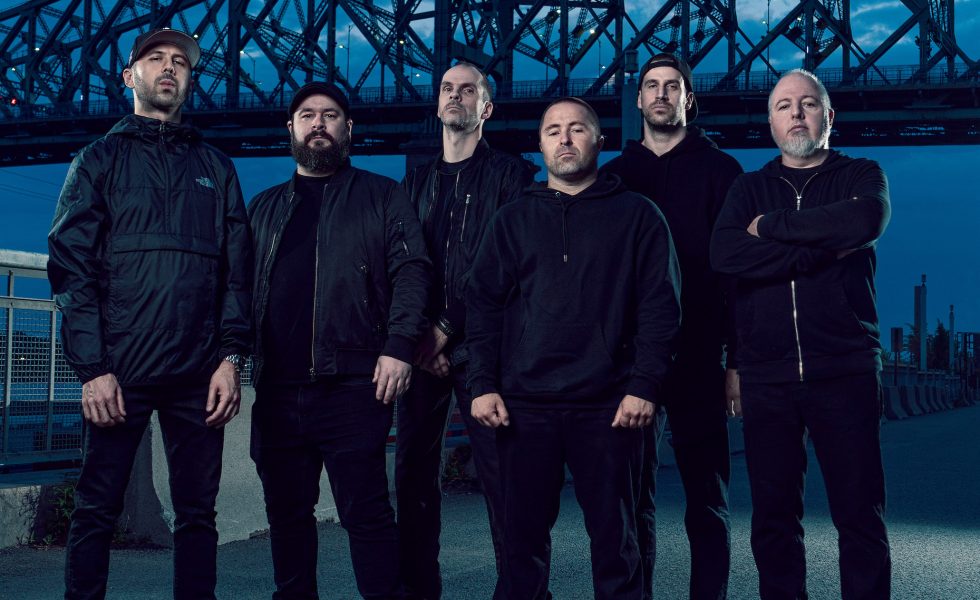 Deathcore, that often maligned sub-genre, was once the new ‘it-thing’: the breaking trend and burgeoning curiosity, typified by the fusion of death metal riffage, slam sections, tech drumming, hardcore breakdowns and usually some summoned-from-the-bowels-of-Hell gutturals (maybe even a cheeky pig squeal or seven).

Now, given that people usually place this period of musical discovery roughly around the mid-2000s—when Myspace and Blockbuster weren’t just forlorn relics of a bygone era—it’s safe to say that times, well, they are indeed a-changing. Deathcore, following the evolutionary path of all maligned subgenres, has resorted to bringing in new ideas to keep things fresh and exciting. When we talk to Despised Icon guitarist Eric Garrin about the recent release of the band’s sixth full-length album, Purgatory, and ask him why this might be the case, his answer is brutal in its honesty.

I think the real challenge is to prove yourself that you’re worthy, and we also wanted to prove to ourselves that we were still relevant too. That was the kind of mindset we were in when we started to write the material for Purgatory.
[ Eric Garrin ]

With the album process itself taking three years, the band had considerable time to workshop and test new material, including any permeating outside influences. “Whenever we’re in the creative process, we like to try to incorporate new stuff or think outside the box a little bit. There are essentially two teams of writers: there’s me and Alex Erian [co-vocalist], and there’s also me and Alex ‘Grind’ [Pelletier, drummer],” says Garrin. “I think whenever one of us tries to incorporate new stuff and maybe changes the sound a little too much, there’s always the other partner and team that’s going to bring back the ideas and the band’s sound. So, it balances things out a little bit, I guess. It allows us to try new stuff and incorporate it. But at the same time, it keeps us [within] the band’s sound boundary, if I can say so.” For Garrin, this partner factor has eventually wormed its way into the group’s overall song-writing dynamic and helps to explain why, on Purgatory, the band is “sticking to [their] guns and not straying away too far away from [their] sound.”

One example of this phenomenon is the album’s stark mid-way point, Moving On: a crushing slow-burn that finds Despised Icon locking into a tight groove for a solid five-minutes, pairing a heavy rhythmic assault with dark lamentations from dual vocalists Erian and Steve Marois. Reflecting on this track, and why it’s one his favourites off the album, Garrin describes its evolution as stemming directly from his partnership with Pelletier. “That song is almost 100% Alex. He came up with the basis of the song, the main melodic riff the song starts with, and then pretty much every other part in the song came from him,” says Garrin. “I think that if you ever played that song to someone that has never heard deathcore, or has never heard of Despised Icon before, I don’t think they [would] think that it’s from a deathcore band. There’s a huge Morbid Angel influence in it.” Considering that the guys in Despised Icon are all in their late thirties and early forties, it’s hardly surprising that they’d pull creative inspiration from the infinite well-spring that is 80s metal. “I think that when he came up with this idea, these types of riffs and drumbeats, he was inspired by old metal, he listens to bands like Manowar and hair metal bands and old stuff from the 80s. He listens to a bunch of stuff and has such weird taste,” Garrin says with a warm-hearted chuckle. “If I could show you how the first draft of that song sounded, and then how it came out [in the end], it was a completely different song with different riffs and stuff. It’s just that it evolves so much, it’s crazy.”

The theme of Purgatory wasn’t meant to be applied as a religious thing, but more a place of trials and challenges.
[ Eric Garrin ]

As one of the pioneers of the deathcore sound, Despised Icon have always recognised the importance of concept and thematic resonance for bringing together the disparate elements of the genre. And yet, in 2019, even this aspect itself is changing, a point Garrin makes when discussing the album’s striking album artwork. “A lot of bands right now, especially in the deathcore scene, they’re using a lot of space-themed artwork with planets and stars and aliens and monsters. Using a lot of bright colours and fluorescent colours. So, we said, ‘You know, why don’t we just try to be different and stand out. Go the opposite way and do a Renaissance painting.’” Turns out they’re not the only ones with this inclination towards bringing in the old-as-new, recruiting the talents of German painter and artist Elian Kantor, whose work has been featured on releases for their contemporaries in Thy Art Is Murder, Venom Prison and Hatebreed.

“Most of the album concept and the whole artwork theme is pretty much a collaboration between me and Alex Erian. Alex put the final touches on the lyrics for the title track, Purgatory, and also a French song on called Vies D’Anges, which translates to ‘Life of Angels’,” explains Garrin. “For Alex, the lyrics for that one are from a more personal point of view, [about] the burden of wanting to, or trying to, achieve your goals and making sacrifices to get there. Those difficult choices and hard decisions you’ve got to make sometimes. The theme of Purgatory wasn’t meant to be applied as a religious thing, but more a place of trials and challenges. That’s why the artwork represents the angel and he’s in purgatory—it’s all black and that’s how we wanted to depict it, because he’s in a dark place. And the weight of his wings, these golden wings, which represent your life goals or anything, are such a burden that they are tearing off from his back.”

Deathcore itself might be changing (and that’s probably for the best), but for now, Despised Icon are more than happy with cultivating a mood. “I think it’s definitely one of our darker albums,” says Garrin, with a noticeable hint of pride. “We sent Eliran the album, so he could listen to it and read the lyrics while painting the artwork. So, I feel like it somehow translated into him and came out with this beautiful, dark painting. When I look at it, and I think of those songs, I think it’s the perfect match.”

Purgatory is out now through Nuclear Blast.