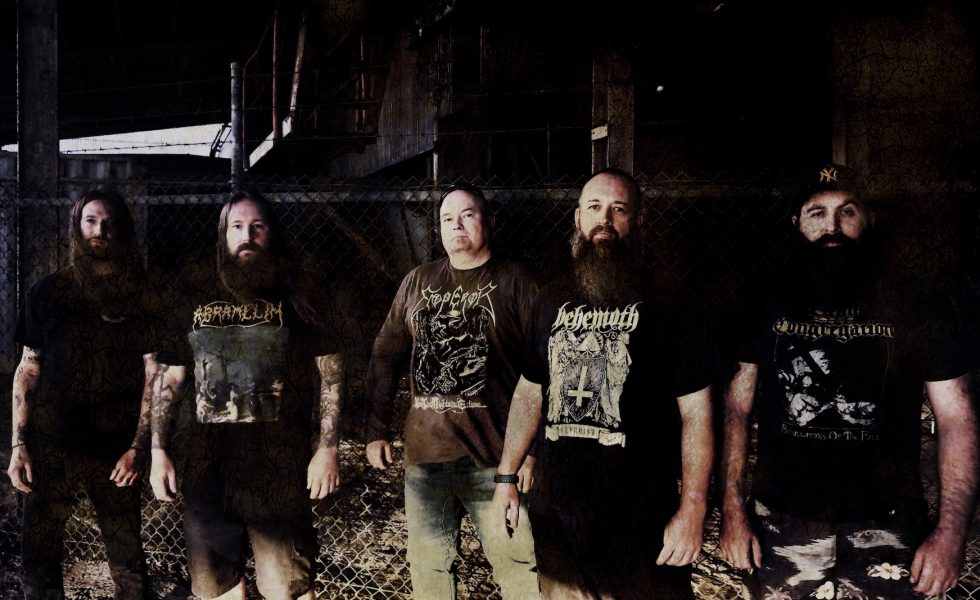 DESCEND TO ACHERON // The Gift Of Suffering

Put together by two former members of In the Burial and now including players from local stalwarts like Truth Corroded and Imminent Psychosis, Descend to Acheron are hardly newcomers to the Australian death metal scene, even if their debut EP has only just been released.

“Myself and Pete [Clarke] were in a band called In the Burial together,” vocalist Andy Kite says, explaining the origins of Descend to Acheron and their newly-minted six track recording The Transience of Flesh. “When we left we started working on songs. We wanted to get something out pretty quickly so we knuckled down and wrote those songs. Getting a drummer in Adelaide is pretty much impossible, so we just got Dave Haley [Psycroptic/Abramelin] in and laid down the songs because we wanted to get this out pretty quick.”

Kite, who owns and runs a recording studio in his backyard and has worked with many of the city’s metal bands in the process, offers an ironic chuckle. Released in April, the EP was actually completed in 2014.

“Then of course,” he continues, “we realised that we needed to find people who could play this stuff, in Adelaide, who wasn’t already in 20 bands!”

The South Australian capital’s metal scene is a notoriously incestuous one. Trying to put together a line-up in an environment where it seems like almost everyone is already a member of several other working bands wasn’t easy: “That’s part of the reason why the EP took so long to release,” Kite says. Fortunately, their drummer situation was resolved in a pretty timely manner.

Personally, I’m an atheist but strictly speaking, I’m not anti religion. I definitely don’t want to be known as an anti-religion band, because that’s been done to absolute death, and I’m sick and tired of it.
[ Andy Kite ]

“In Adelaide there’s probably four drummers that could play our stuff, and they’re all in heaps of bands! That’s just the way it is. We were just really lucky with Kieran [Russell]. He was helping me put the finishing touches on my new recording studio at the time he had parted ways with Truth Corroded. He was literally at my house when that happened and I said, ‘You should join my band’, and I showed him the stuff that day. The guy didn’t have a chance. I was like, ‘I heard you got some more free time!’”

The Transience of Flesh harbours a haunting and evil old school death metal vibe. Given track titles like Plague of Superstition and The Godless, one could be forgiven for assuming Descend to Acheron are vehemently opposed to religion, but Kite dispels such a view.

“It’s not necessarily anti-religious,” he says carefully. “Personally, I’m an atheist but strictly speaking, I’m not anti religion. I definitely don’t want to be known as an anti-religion band, because that’s been done to absolute death, and I’m sick and tired of it.”

Rather than religion itself, the vocalist explains, the behaviour of some of its leading figures is the true target of the band’s ire. “Deception of any kind really bugs me,” he says.

A TV preacher and faith healer, Benny Hinn is the leader of a worldwide charismatic Christian ministry. Kite decided to write about him while researching Mother Theresa, the Catholic nun and saint whom British journalists Christopher Hitchens and Tariq Ali once castigated as a fundamentalist fraud for her belief that the poor should accept poverty as their destiny.

“I came across some clips on YouTube of news reports about people who were losing their houses and stuff because this guy up on screen was telling them that if they donate a thousand dollars, it will come back to them tenfold,” Kite says. “So instead of paying bills and feeding their family, they were donating their money willingly to the church. Here was this joker buying private jets and stuff, and people were losing their houses, and that just made me pretty angry.”

“You don’t even have to go out of your way to be harsh about him,” he continues. “It’s just a straight up fact that the guy is fucking evil.”

Restricted from playing live for the moment like everyone else, Descend to Acheron are instead now concentrating their efforts on expanding their set for when they can finally hit the stage.

“We’re gonna knuckle down on the album,” Kite promises. “We’ve got a few riffs ideas already, and some of them are taking it to the next level, which is awesome.”

Death metal fans should be prepared.

We’ve got a bunch of ideas for new stuff, but that’s basically our set at the moment.

Purchase & Stream Descend to Acheron’s The Transience of Flesh here.