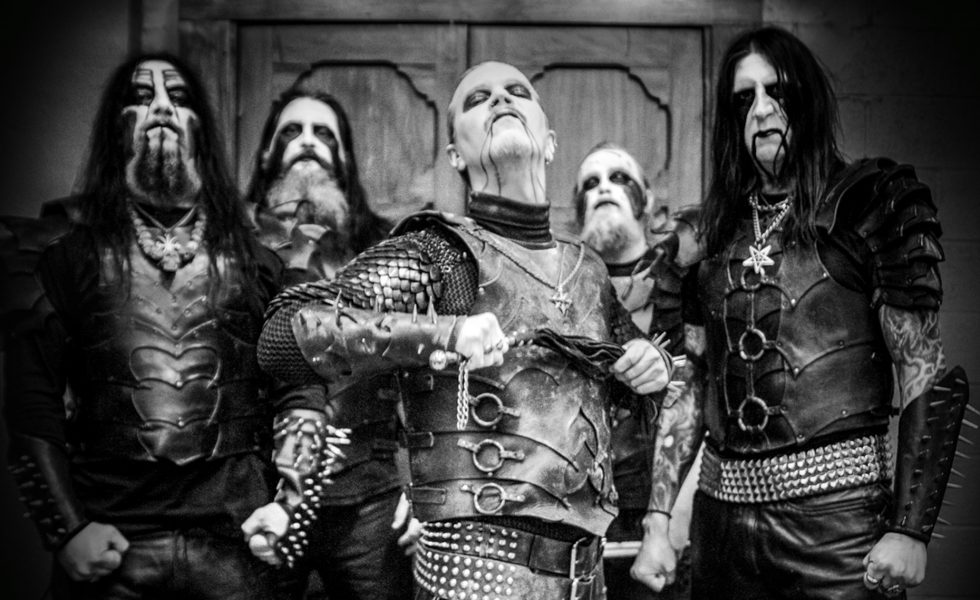 DARK FUNERAL // The Darkness Within

At the heart of the brooding, menacing depths of Swedish black metal, there is one band that has revelled in the crucible of longevity: Dark Funeral.

Since forming in 1993, the dark satanic rage of Dark Funeral’s sound has manifested in six studio albums and numerous touring miles. This September, in the wake of their sixth album Where Shadows Forever Reign, Dark Funeral will cast its foreboding silhouette over Australian shores for a series of infernal shows.

“This record,” says Dark Funeral’s iconic guitarist Lord Ahriman, “I think symbolised the time in which it was written. There were a couple of tough years between the records, which made this last record the most honest, most personal record to date. Of course for every record you write, you learn new things, how to think when you are writing, and this time after I got into that writing process and got a flow for it, everything fell easily into place. That was a new experience. Normally, it’s tougher to write a record, but this time everything felt just so natural to keep on building the songs, so it’s got really good flow this time, just felt good.” that was one thing I felt on this record, that the lyrics had to really go hand in hand with the music, have the same kind of…what I had in mind when I wrote the music. The music and lyrics are more in symbiosis with each other this time. I guess that also makes a difference for the outcome.”

As with Where Shadows Forever Reign, this tour will be our first experience of Dark Funeral’s new vocalist, Heljarmadr. His addition to the band in 2014 also heralded a revival in his own passion for lyrics, as Lord Ahriman says. “This was the first time since our debut that I was really involved in the lyrical side of things, that I really even cared about that. Before, I just wanted to focus on the music, and Caligula [Emperor Magus Caligula, former vocalist] just took care of the lyrics, even though I came with some input once in a while. But this time, it felt…I don’t know why…I just had so much more to tell. For me it was very important that this also came out in the songs, but then Heljarmadr also has his way of writing lyrics…I don’t know, it’s just become a really good match for the music…and already we’ve talked about where we want to go for the next record and I think we are on the same page.”

So, given that Where Shadows Forever Reign was released in 2016, how far into the next record are they? “Just in the beginning,” Lord Ahriman says. “We have talked about it, I’ve got some written, but there’s been so much touring and also I take care of …you name it…all the business side of the band. But as soon as I get a feeling…its easy for me when I am home, I have my home studio set up so I just have to, you know, bring it on, and throw out some ideas.”

So we are definitely a better live band than ever, a more professional band these days than ever. Feels really good.
[LORD AHRIMAN]

There have certainly been some trialling phases with the ‘business side of the band’ for Dark Funeral over the decades, but as Lord Ahriman informs us, the band has emerged more resilient and focussed than ever. “There is more focus on the band,” he states, “not some other bullshit around us. I feel like everybody is very professional, very dedicated, focused on doing the best for the band. There have been some periods when some other stuff took over from that. So we are definitely a better live band than ever, a more professional band these days than ever. Feels really good.”

The ‘professionalisation’ of black metal bands is a divisive topic, but Lord Ahriman is adamant that continuing to develop as a band is part of his commitment to Dark Funeral’s fans, as he says, “I can only speak for us, we are always trying to improve ourselves, anything else would be just stupid. I am never satisfied. I can be satisfied, but I still want to better things all the time. Of course, the bigger you become as a band, the more responsibility you get, you know, you have to obviously change to a more professional side in certain ways to make it respectful for the fans. I guess there is always a different take on that … I don’t really look much what’s going on in the scene, I focus on Dark Funeral and our own progression, what other bands are doing is not really for me to spend time for.”

Despite a continuing to grow as a band and organising ever more impressive live shows, there is a sense of timelessness in the appeal of Dark Funeral’s music. Lord Ahriman says it comes from a very internal place. “For myself it is an outlet,” he says, “when I write the music, it is to kind of, I don’t know, try to survive. For me, when I write the music and when I listen to it when it’s finished I get this kind of relief, it’s hard to explain but, I can just disappear in to my own world and all the bullshit that’s going on around just disappears.”

Does he think that the music is also cathartic for Dark Funeral’s fans? It would seem that the answer is yes. “For the audience…” he pauses a moment. “…I get lots of letters from listeners and from fans when they explain, some go into depth, about how much our music has saved them from death, basically, in different ways. So, I guess there is a catharsis not only for me, but also for listeners. Not all, but some. I think, you know, the lyrics and the music, different people tend to sink into that, and just find our own darkness within our music.”