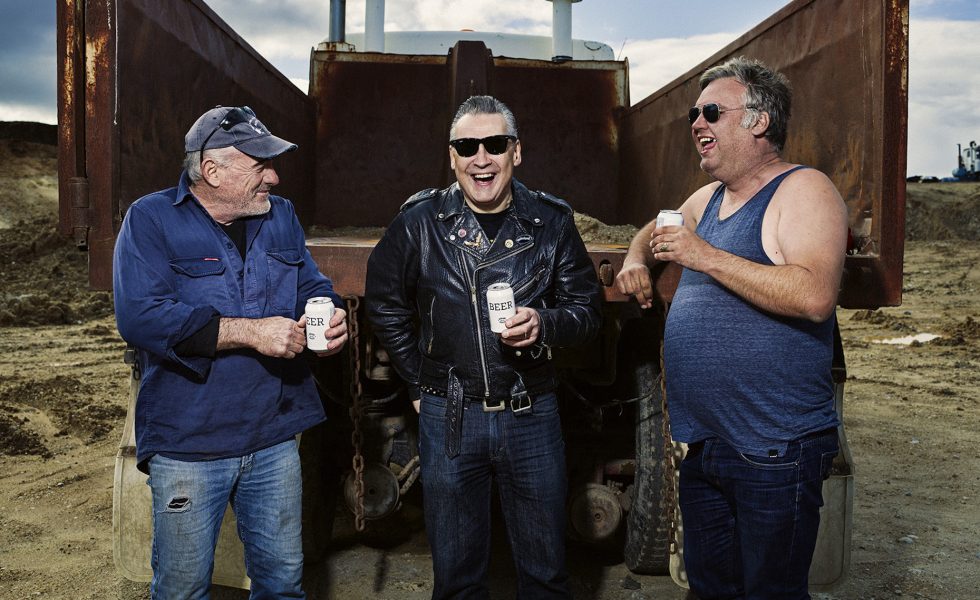 COSMIC PSYCHOS // Cracking Cold Ones With The Pub Rock Kings

Apr 09, 2018 / WORDS Anna Rose / Fantastic blokes and they all have a different take on those same two or three chords.

Cosmic Psychos, the legendary band that has made Aussie pub rock popular overseas and at home for more than 40 years, have just dropped their ripper new album, Loudmouth Soup.

Fuzzed-out bass, wah-wah guitar and bristling lyrics filled with Aussie slang, the band are back in true Psycho form. Lead single Feelin’ Average delivers a song about the hangover from hell–no surprise they’d address the subject given the good times they’ve had together.

Through various lineup changes and a mass of great releases one thing has always been the same for the Spring Plains trio–it’s all about the good times, the cold beers and the laughs with your mates. So what happens when you separate these blokes, bassist and vocalist Ross Knight, drummer Dean Muller and guitarist John ‘Mad Macka’ McKeering, and talk to them about all things Psycho? From beers to Germans, German beers to touring, the revelations are pretty funny—Cosmic Psychos are, together or apart, always about the hard drinking and the good ol’ Aussie rock.

Cosmic Psychos are drinking their way around the country in support of Loudmouth Soup, with The Chats, Birdcloud, Meat Bikini and a great many others sharing the stage with them on their travels. So if you like what these blokes have to say about what it is to be a Psycho, you best get to a show and grab a cold one and join the party while you can!

On the Loudmouth Soup tour…

Dean – “Going away on tour, rehearsing, it’s like a fishing trip, like being with your mates. It gets more and more about that as we go along, we can afford to bring more of our mates. Our roadie Digger is possibly the world’s most useless roadie but he’s a great bloke to have around, he’s a non-playing member of the band, really. Gotta have him there even though at the end of the night he can’t do anything anyway. Quite often there’ll be a tray of beer and you’ll say ‘Oh can I have one of those?’ and he goes ‘Fuck off mate, get your own.’ Nah, he’s a ripper. If you can set your life up so it’s fun, well, that’s the ideal life isn’t it?”

Ross – “The best thing about the Psychos I feel over forever and a day, is we don’t regard any band as a support band. The first thing I say to whoever we play [with] is ‘Our beer is your beer, just make sure we don’t run out!’ The dual tour we did with Dune Rats a few years ago, for me that was like stepping back in time. Looking at those guys, they were just so excited and so into what they were doing – I’d watch those blokes on stage and how they behaved off-stage and saw a lot of myself in them, just reverse the clock 25 or 30 years!

“We look at the bands as being on tour with us, great people who love what they’re doing. As long as they’re not too intense and they enjoy what they’re doing. If they’ve got that right attitude then they’re with us for life, and if they become poplar well that’s great, they can drag us along.”

On drinks on international tours…

Ross – “There was one time in Germany a few years ago where Macka was feeling a bit average. He didn’t look the full dollars’ worth and we were all getting our breakfast–Macka had a Jägermeister and washed it down with a liquid strawberry yoghurt, and I go, ‘Jesus, Macka! You’re having that for breakfast?’ and he goes, ‘Yeah, I don’t feel too good.’ I’m thinking to meself, any man that can survive that can survive any hangover! He knocked that down and then went out and had about three or four darts afterwards so I reckon that was a pretty mean effort and he must have been feeling crook.

“We all pull up reasonable okay. I’ve had a few bad starts but Dean and Macka, I dunno, maybe we all just stay pissed, who knows! We usually have a beer for breakfast when we’re on tour anyway, especially in Europe. Pull over and you have a piss and a beer. In Germany the beer selection for brekkie beers is fantastic. We don’t get rat-arsed all day, we just keep the beer buzz going and it’s all good.”

Dean – “Germans are great, most Europeans are fantastic. The French can be pretty French. My favourite Euros are the Dutchies. They’re a lot like us, they know how to take the piss out of themselves, which is rare in Europe.

“Mad Macka in Germany on the last tour–we went to this radio station and they said ‘Do you want something to drink?’ and they bring out a bottle of Jägermeister and he glugs it back and next thing you know he’s making weird noises into the microphone going ‘Weeeee, brrrr, bububpow!’ Bird noises! We hid the bottle because he hadn’t quite finished it, he was gonna drink the whole thing and you know what that stuff’s like! We did the interview, got in the van and he was staggering around, he was paralytic. We had to play an in-store record [shop] thing and it was just a fiasco, he was falling over, knocking record bins, just classic Mad Macka. I could go on and on about road stories and drinking stories but we’re not all about drinking… though it is a large part of it!”

We don’t get rat-arsed all day, we just keep the beer buzz going and it’s all good.
[ Ross Knight ]

Macka on those Jägermeister stories…

Macka – “[I’ve] only had one major run in with Jägermeister, at the German radio station I drank three quarters of a bottle. Jägermeister with yoghurt for brekkie? Never heard of that time, can’t recall!”

On the other blokes…

Ross – “The combo we have now, they’re fantastic. Fantastic blokes and they all have a different take on those same two or three chords. Every formation of the band has been different and for me as the boring old bass player, I love it because I get entertained by the other guys. I’m entertained meself by listening to Macka and Dean play. I love it, love it. Every song sounds a bit different every time and that’s not through skill, that’s through beer!”

Macka – “Ross is very humble, Dean is a star, and we sort of keep each other in check. Ross is never too serious, and that’s part of the key–we aren’t that serious about it. We’re lucky for whatever reason but we just try to be positive.”

Dean – “I warn you, he [Mad Macka] is a sensitive soul. Mad Macka stories, there are too many. There’s no off button with Macka, he’s always on, always going until the lights go out at the end of the day. He’s like a little kid really, he’s got so much energy. I love him dearly. He’s always very considerate and sensitive to other people’s needs. There you go, there’s a soft bit. Ross on the other hand, he’s a prick. A very hard man to work for, like Frank Zappa and Buddy Rich all rolled into the one guy. Not.

“There’s no rehearsing, no daggers if you make a mistake, it’s always a laugh. Drinking heavily before shows is encouraged so really, it’s the easiest band in the world to be in. I’m blessed.”

On beer preference and drinking etiquette…

Dean – “Don’t drink hot beer, no way. I can tell you what my not favourite beer is but I don’t wanna offend anyone in Adelaide, but West End Draught is not my favourite beer. Say you get a can of XXXX, throw a little bit of sick into it then get it nice and cold–that’s West End Draught. They love that stuff in Adelaide. Favourite beer in the world is Belgian beer called Westvleteren, a Belgian triple and quite a heavy alcohol beer. It comes to you in its own special glass with a frilly neck and another special coaster, they make a big fuss of this beer. It’s beautiful, they pour it with a big head on it, really bubbly. I love Belgian beer, especially the Trappist made by the monks in the monasteries.”

Ross – “Unfortunately because my beer myself is quite fatigued at my age, a man’s got to know his limitations, as Clint Eastwood said. Because my metabolism is dropping I go for the tasteless low carb beers quite often because it’s a ways to a means. I can get meself in a nice little area where me gut’s not gonna grow but I do appreciate really, really good beer. There’s never a bad beer as long as it’s cold!”