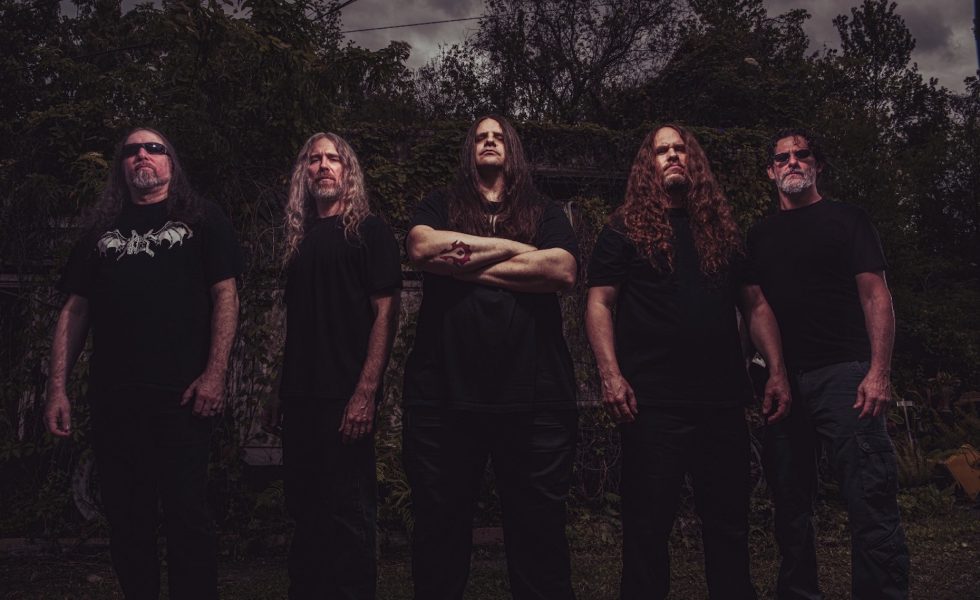 CANNIBAL CORPSE // A Lesson in Violence

If there’s one thing Alex Webster knows about, it’s death metal. For over thirty years, Webster has been one half of the formidable rhythm engine behind death metal juggernaut Cannibal Corpse.

As a pioneer of a style of relentlessly extreme music that continues to define intensity, the bassist admits with a smile that he sometimes feels a few “random cracks and pops” in his neck and shoulder area. Not that he’s about to let that slow him or the band down one bit.

“There’s not really a precedent. We can’t look to other bands and see, ‘How’s their neck holding up?’” he says, chuckling. “Seriously, that’s what me and George and Rob talk about. I’m like, ‘Hey I hear some noises in my neck when I turn it this way, or whatever.’ It’s from all these years of headbanging. I think the drummers in death metal have it the hardest. They are the athletes. I can tone down the headbanging and still play the hell out of this stuff. But the drummer does not get to tone anything down. So I think the drummers might be the one who say, ‘Hey, enough is enough’. But that might not happen for a long, long time. Paul’s very fit. He’s in very good health, and I don’t see any quitting in him.”

He says, without any hint of irony or exaggeration, that he hopes they have another 20 years ahead of them. Just a casual blasting from their new album is definite proof that death metal’s goriest splatterhounds certainly aren’t ready to put down their weapons anytime soon.

Violence Unimagined is the 15th Cannibal Corpse album, and the first since 2005 to feature the injection of new blood into the line-up. Joining them for this latest release is long-time friend and fellow death metal stalwart Erik Rutan, who comes into the band in place of former guitarist Pat O’Brien, whose arrest on weapons, burglary and assault charges in 2018 ended his career. Rutan brings in a wealth of experience and talent as a producer and musician with Hate Eternal, Morbid Angel and others.

“I have to say that having someone like Erik joining the band is one of those energising things,” Webster says. “We’ve always had a strong work ethic with our band, but Erik is probably even the next level. He’s such a hard working guy, and that kind of rubs off of everybody around him.”

No stranger to the band in any sense, Rutan has acted as producer on the last five Cannibal Corpse albums, giving him the same tally as Scott Burns. As a musician, he’s been able to work his own personal style and flair into the band’s established sound.

“He brings a ton of experience, he’s been doing death metal as long as we have. He brings his own style. There’s plenty of shredders out there, and Erik can definitely shred, but he’s also a very talented guitar player who has his own sound. We want that to be part of our band. Because Erik has such experience working with us, and knows our music so well, he’s been able to take his own distinct style and make it part of us.”

Violence Unimagined is every bit the slab of epic, flesh-ripping barbarity Cannibal Corpse albums are known to be. Rutan’s contributions will be noticeable to those who have followed his career, and if anything they add a new depth to the band’s ferocity.

“He wrote the songs Condemnation Contagion, Overtorture and Ritual Annihilation for Violence Unimagined, and they’re full on Cannibal Corpse songs,” Webster goes on, “but I can hear that they’re Erik’s too. He’s managed to meld with our style very well. I think it would have been harder for someone else to meld with us in that way, because he knows our music inside out.”

Rutan shares a lot of history with his current bandmates. His involvement in the death metal scene goes back to the late 80s and an early band out of New Jersey called Ripping Corpse.

“I’ve known Erik since the early 90s,” Webster says, “and I think he met George way back in the days when George was involved in the scene in Jersey and a lot of people from that area were doing the same shows together and stuff. We have a long history of friendship, and the musical history is there too. He’s already part of the family, having been our producer, so rather than have someone new coming in, it’s like having a family member take on an additional role.”

Notorious as much for their rigorous touring regimen as they are for their gore-soaked musical imagery, Cannibal Corpse now hasn’t played a show since December 2019.  With Webster in Oregon and the others in Florida, they haven’t spent much time together at all in the past 15 months. Despite this, he says that apart from the inability to tour, the pandemic didn’t upset their overall plan all that much.

“The first couple of months of pandemic,” he explains, “our plans didn’t change all that much, other than the fact that I live on the other side of the country now so I recorded the bass tracks in my home studio. But that’s not an uncommon practise these days for a lot of bands, pandemic aside. It’s just quite possible to make good home recordings now. The technology is so much better than it was thirty years ago. So I did my bass tracks here and the other guys did their tracks down in Florida. That was the big difference then, because we had sort of planned to have 2020 off and then maybe in November 2020 we’d tour. But once the pandemic kicked in, we knew we wouldn’t be playing any shows. It does seem strange to have any album coming out in April without doing any shows for it.”

Violence Unimagined arrives just as the old spectre of censorship once more arises and sections of the community get bees under bonnets in arguments about freedom of expression. While much of so-called cancel culture appears to thrive on manufactured outrage about things that either matter little or turn out to be hoaxes, censorship is something that has dogged Cannibal Corpse almost from the very beginning.

“I don’t take much notice of it, because we’ve already been dealing with it for so many years,” Webster says drily. “We’ve already been having censorship problems, so if things get a little worse for a while, we’re already sort of prepared for that. We’ve had shows cancelled because of our lyrics, we’ve had to change set lists because of our lyrics, we get album covers banned because of how graphic they are. This has been going on for us the whole time. Ever since Butchered at Birth,” he admits with a smile, “the heat has been on and not gone away. When we saw the new cover, we thought, ‘Well, that’s going to get banned, we need a second one!’”

It’s unlikely that Australian fans will find a domestic copy of Violence Unimagined with the full cover art, which appeared briefly in the visualiser for Murderous Rampage. Since the mid-90s, the band’s artwork has been heavily regulated in this country. Albums like Gallery of Suicide and Gore Obsessed were released locally with black covers. In other markets, most notably Germany, Cannibal Corpse albums feature a modified version of the original cover art.

“We’ve been doing that since Tomb of the Mutilated,” Webster reveals. “We had so much trouble with Butchered at Birth. Now, in Europe, it can only be bought with a blank red cover. We wanted to make sure that didn’t happen with Tomb of the Mutilated, so we had them do two covers, and ever since then that’s been a good solution. When I hear people talk about cancel culture and censorship efforts that are happening now, we’re certainly prepared as much as anybody could be. We’re ready to handle these kind of problems, and hopefully they don’t happen, but if they do, we’ve at least got a little bit of experience dealing with people wanting to censor us. So we’ll deal with every issue as it comes to us.”

Germany’s stance on the band’s music and imagery is confusing, given that the Scorpions once released an album with a naked pre-pubescent girl on the cover to barely an outcry there (in other places it was banned outright). Yet to this day, Cannibal Corpse are unable to perform several of their fan favourites in some parts of the country.

“There was one particular woman in Germany who was in charge of it [there] – well, I think there’s more people than just her involved with it – and they go through everything and read everything and pick out the songs that they think are acceptable and try to push governments to not allow us to play them. Some cities in Germany we can play certain things that we can’t play, for example, in Munich. It’s a lot more conservative, maybe, in Bavaria, so they’ve had a little more traction getting the more conservative governments to ban us.”

There’s no doubt that Cannibal Corpse’s lyrics and associated artwork can exceed most limits of taste as they plumb seemingly limitless depths of depravity and bloodshed. But as Webster points out, their style of horror entertainment has been mainstream in the film and TV world now for quite a long time.

“Look at some of the glorious movies – I’m thinking of movies from 10, 15 years ago like Saw, or Hostel – those were pretty popular, almost torture horror that were very mainstream in the United States around the turn of the millennium. But if you’re singing about those things, you run into a censorship problem.”

Game of Thrones captured audiences for a decade despite gratuitous carnal depravity, children being burned alive and women getting torn apart by dogs, and enduring megahit The Walking Dead is virtually the same George Romero-inspired zombie Apocalypse horror that Cannibal Corpse have made records about since 1990.

“People seem to accept it more when it’s in a movie. They have an odd way of picking and choosing who they’re trying to censor. If they tried to understand where we’re coming from, maybe they wouldn’t bother, because we’re certainly not trying to promote violence and we think the characters we write about in our songs are evil and we wouldn’t want anything in our songs to actually happen. But, we’re making horror entertainment just like a movie or a book, and it’s got to be scary, and those images are often ugly. You don’t have to listen to it if you don’t want to.”

Webster’s main beef is that the people who want to censor them and bands like them – a vocal but small minority, he is quick to point out – have no understanding of it and are making judgement about the audience and why they find death metal entertaining.

“They’re under-estimating the audience’s ability to separate fantasy from reality,” he says. “I guess they’re afraid that it will inspire people to do horrible things, but that doesn’t really seem to be a thing. They’d be better off focusing on other problems. There’s so many other things they could be doing to bring positive energy to the world than trying to censor death metal.”