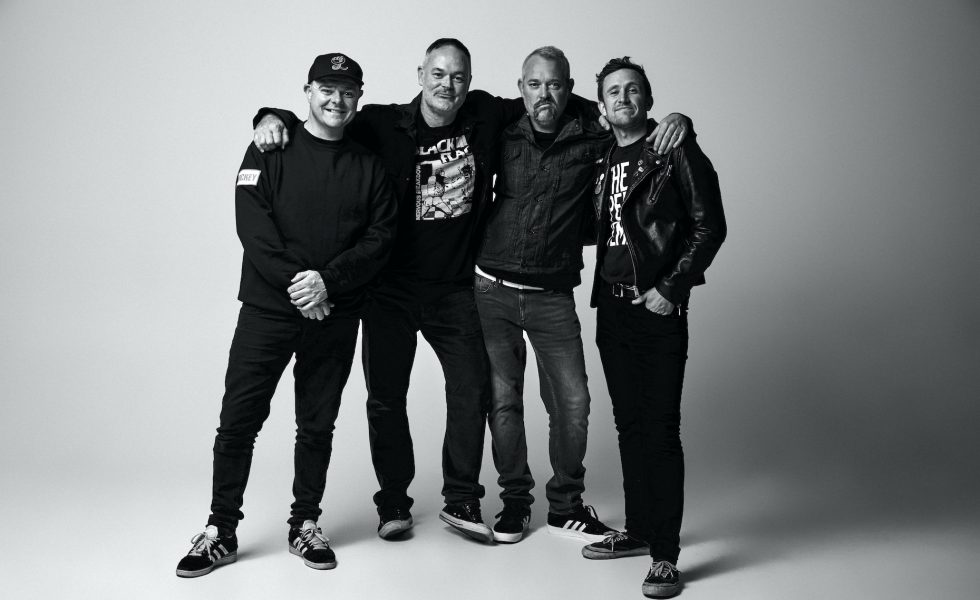 When Bryget Chrisfield checks in with Bodyjar’s lead vocalist/guitarist Cameron Baines ahead of their New Rituals release, they discuss recording an album during a pandemic, the band’s extravagant major-label period, backstage memories and how being “really into skating” fostered his obsession with punk music way back when.

“It seemed easy at the time,” lead vocalist/guitarist Cameron Baines recalls of creating New Rituals, “but, you know, the producer Sam Johnson was like, ‘Hey, congratulations on recording an album during a pandemic,’ and we were like, ‘Oh, shit, yeah! We did, didn’t we?’”

The third single to be released from Bodyjar’s new album is a cover of Rain by Dragon, which, Baines explains, is a song the band had previously “mucked around with at jams”. “We thought, ‘Fuck it! Let’s put a cover on our album,’ you know?” he elaborates. “We haven’t had a good cover since we did Hazy Shade Of Winter and that was probably, like, ten years ago. And it was the most popular cover on triple j one year or some shit–I can’t remember now, but it did really well and it’s always gone down pretty good live. So hopefully this Rain one–we’ve only done it a couple of times live, but it seems to work … It’s just got the singalong thing you want live. It’s good to put a party song on a record, I reckon; something you can just belt out real easy.

“And we got Todd’s permission, too–[Dragon singer Marc Hunter’s] brother, who plays bass in Dragon–which is good. Our manager emailed him and said, ‘Are you cool if we put this on the album?’ And he was just like, ‘Yep, no worries’.”

About four years ago, Bodyjar started “just demoing songs and stuff” for what would become their eighth album. Then when COVID-19 struck and shut everything down, completing New Rituals became a “stop-starty” undertaking. But Baines believes the finished product actually benefitted from these unavoidable delays. “We got a few extra songs out of it–I think there was probably about four of them–and ended up replacing some of the weaker songs,” he reflects. “It felt like the world was sort of falling down around us a little bit and I guess those things were addressed in the newer songs that we wrote in that little gap.”

Even though New Rituals was recorded IRL, with all Bodyjar members present, they also worked separately, emailing demos back and forth in between studio sessions. “We’re a little bit older so everyone’s got other commitments–family commitments and stuff–so it does help if you know how to make a demo on the computer,” Baines acknowledges. “In the old days, we used to spend so much money going to proper studios to demo stuff, but now it’s a bit more of a home-studio thing.”

After joking about the kinds of things that old-school, major-label bands would typically spend exorbitant amounts of money on–such as hiring a limo to transport them to the recording studio–Baines reveals, “When we were on EMI we wasted so much money! We used to go to Hothouse–get a proper studio with a proper producer–and just do demos. We did three albums on EMI and we had tonnes of budget so we’d just go into the studio, and we might demo eight songs and keep one of ‘em, you know what I mean?

Times have changed so much. Everyone was so extravagant back in the day; like, you’re just burning money. I guess it was fun, but in the end it’s the band that picks up the tab, not the label.
[ Cameron Baines ]

“We ended up spending 300 grand on an album and probably 50 grand on a video. We’d probably spend 50 grand in total, on everything, now.

“Times have changed so much. Everyone was so extravagant back in the day; like, you’re just burning money. I guess it was fun, but in the end it’s the band that picks up the tab, not the label. But we knew that, we were totally aware of everything. It wasn’t like they pulled the wool over our eyes or anything; we were going in and just wanting to have a bit of fun.”

Given that Bodyjar graced Big Day Out stages multiple times, does Baines have a couple of entertaining behind-the-scenes stories he’d care to share?

“We did the one in 1999 with Marilyn Manson and Hole, and I remember watching Marilyn Manson play during the day and someone next to me saying, ‘It looks like a bunch of drag queens having a cookout’,” he recounts, laughing, before pointing out there was a lot of smoke machine action, and dudes wearing makeup, on stage. “It was funny. And then [Manson] comes off stage and there was this big blow-up pool out the back–for all the artists–and he just pulled out a knife and slashed it, and the water gushed out.

“There was another one where I think Courtney Love wanted to see Australian animals, so they set up a fucking zoo backstage. And it had koalas, kangaroos, snakes, a dingo, cockatoos and like all this shit so she could just come and have a look. And obviously we were allowed to have a look, too, so we had a look and we’re like, ‘Yeah, this is pretty cool,’ and then go off and play our show. And it was a cool show. And then we came back and the bloody dingo had attacked and killed the bloody cockatoo, and there was feathers everywhere. I don’t think [Courtney] even went and had a look!”

Baines was “really into skating” when he was a teenager and admits, “That’s definitely how I discovered punk, just from skate videos and going up to the ramp. The older guys who were skating–I guess they were like 17, 18–were listening to Bad Religion and Dead Kennedys and Black Flag and that’s how I discovered that music and then started going to gigs. One thing just leads to another, I guess, and all of a sudden you’re a fan of that sort of music. Then I got a guitar and I learned it was pretty easy to play punk songs, too,” he cheekily adds.

So what would’ve been the first couple of riffs Baines remembers teaching himself on guitar? “Definitely Ramones was real easy to play, so I remember learning that … And Descendents’ Coolidge–that’s one song I remember thinking, ‘Oh, yeah, this is the best song ever’–it’s on Descendents’ All record–and just trying to work out the riffs in my bedroom.”

When an American kid he befriended at his local skate ramp returned to the States, Baines decided to pay him a visit and, while abroad, he attended a life-changing gig: “I actually saw a Ramones show that really heavily influenced me. It was Dee Dee Ramones’ last show at

One Step Beyond, a little 400-seater club in San Jose, in 1990.” Also during this trip, Baines went cassette shopping. “I knew about Descendents from skate videos, but I went to Tower Records and bought All on cassette. And I brought it back and took it up to the ramp and handed it around, and it got borrowed by everyone up at the ramp– you couldn’t even read the song titles on the case, you know what I mean? They had completely rubbed off from so many people borrowing it and taping copies.”

The fact that Bodyjar went on to tour with Descendents must’ve been a full-circle moment, then. “Yeah, Descendents produced one of the first albums we did [1994’s Take A Look Inside] so it feels good, ‘cause they were a big influence and it was a big one to work with them and tour with them. So we’ve done a lotta shit, but one thing I’d like to do is to go and bloody record in their studio, The Blasting Room in Colorado. I think that’d be awesome if we manage to get a decent budget again.

“Apart from that I’d like to go back to Japan,” Baines continues. “We’ve probably been there six or seven times, I reckon, but I just wanna go back and do some more shows there, ‘cause it’s fun.” The polite attentiveness of Japanese audiences definitely appeals to him and Baines marvels, “They go off and then as soon as you stop playing they applaud, and then they’re silent while they wait for you to talk.

“And they vacuum the stage as soon as you’ve finished, you know? The Japanese people are really accurate–really, really precise–like, ‘Meet in the lobby at 4:26, leave at 4:30’–you know, the itinerary.

“The first time we toured Japan they said, ‘What kind of mixing desk do you want?’ And so we asked our mixer and he goes, ‘Oh, I wanna use … here’s a photo,’ and so we emailed that to them. And so they said, ‘Alright, cool. We’ll organise exactly the same desk over here.’ So we get there …” he trails off laughing, before sharing the joke. “In the photo we supplied, there was a packet of, like, Marlboro cigarettes on the corner of the desk. And when we get there, they’ve put a packet of smokes in the same place! And an ashtray! When that happened I thought, ‘This is my kind of place. These guys are pretty thorough’.”

New Rituals is out now via Pile Of Sand Records