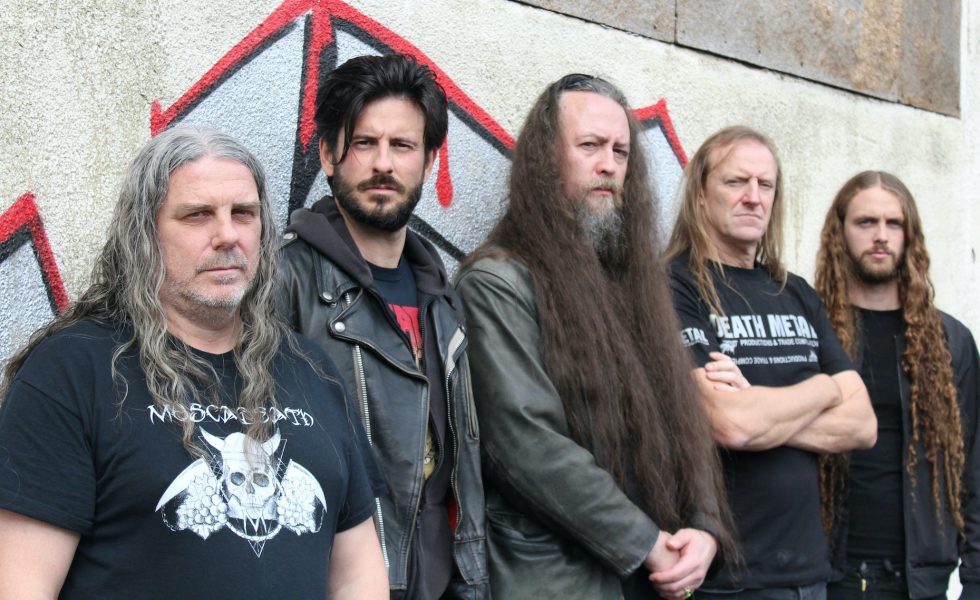 Spawned in the British heavy metal breeding ground of Birmingham – home to Black Sabbath, Judas Priest, Napalm Death and Godflesh – Benediction have been delivering their own brand of death metal since 1989.

MORE: KICK OUT THE JAMS with IN HEARTS WAKE // PRIVATE FUNCTION: It’s Always Their Line REVIEWS: ALPHA WOLF: a quiet place to die // MARILYN MANSON: We Are Chaos // NOFX/FRANK TURNER: West Coast Vs. Wessex // IN HEARTS WAKE: Kaliyuga // KING PARROT: Holed Up In The Lair // MOVEMENTS: No Good Left To Give // iDKHOW: RAZZMATAZZ // BENEDICTION: Scriptures

Unapologetic in their disavowal of directional shift, outside influence or fancy embellishments, the band has changed little since their earliest days. It’s a characteristic that founding guitarist Darren “Daz” Brookes is at pains to point out quite often

“I don’t think we’re capable of change! I’m not knocking us for that, I just don’t think we’re built for it. We’ve never followed the rules, we’ve never had a woman singer, we’ve never put keyboards in… all the things we were told to do to sell records – we never did that! We just want to be Benediction. We’ve always had a particular style and that’s what’s kept us going for 30-odd years.”

Sticking to their guns has meant that for Brookes and fellow guitarist and songwriting partner Peter Rew, Benediction has never been a money-spinning venture, despite decades of touring and the creation of genuine death metal classic albums like 1991’s Grand Leveller, 1998’s Grind Bastard and their 93 piece de resistance, Transcend the Rubicon. Their last record was Killing Music in 2008, but the very nature of the industry left Benediction with “no real drive” to do a new album, despite remaining heavily active as a touring act.

“We’ve still been doing what we’re doing, gigging and carrying on with everything else,” Brookes says. “Benediction doesn’t pay the bills, and it’s never paid the bills, so we have to concentrate on our jobs. We’ve got wives and kids and mortgages. They’re really important to us – not so much when we were kids, but they’re important to us now. It got to the point where we sat down and said we should probably do it. We had a load of new material, so let’s just do it and crank it out.”

Scriptures sees Benediction reunited with vocalist Dave Ingram after 22 years. Ingram returns to the fold in place of Dan Hunt who, under the pseudonym V.I.T.R.I.O.L., also spent twenty years as the vocalist with Anaal Nathrakh. It’s also the first hit out with Benediction for drummer Giovanni Durst and bassist Dan Bate, both originally from LA thrash band Omicida. Regardless of the changes, the Birmingham death metal machine rarely strays from their remorseless path.

“Over the last few years I think a lot of death metal bands just want to see how fast they can go,” Brookes says. “It’s become like a competition about how fast they can go or how technical, and I’m kind of hoping that death metal fans that have only got into death metal in the last eight or ten years… I want to introduce them into what I believe death metal is. A bit of groove and a bit of feeling. You don’t have to be the fastest to be the best. It’s not all about that. There needs to be a tune, there needs to be some rhythms in there. I’m kind of hoping we open a few eyes to that.”

Brookes does admit that Benediction has had to concede a little to the modern world. Their days of ad hoc recording sessions are long gone, for one, and getting together in the same room to work on songs has become harder now that Rew and he live in different parts of the country.

We’ve never followed the rules, we’ve never had a woman singer, we’ve never put keyboards in… all the things we were told to do to sell records – we never did that! We just want to be Benediction.
[ Dez Brookes ]

“It’s different now because in the old days we’d quit our jobs and go to rehearsal and get a case of beer, sit there and drink five or six of those, hang the microphone from the ceiling with a MiniDisc attached to it and then I’d bring it home and tried to figure out what the fuck we’d been playing,” the guitarist explains. “It’s different now because you’ve got Cubase and the Internet and Pete doesn’t live in Birmingham anymore, which makes it difficult.”

What hasn’t changed in their commitment to being themselves.

“One of the things about being together 30, 31 years is that we know what we like, and we know what each other likes. We’re not necessarily influenced by anybody else. We’re influenced by us, I guess, by our history and what we’ve done. We’re more into that than following trends and trying to fit into pigeonholes. It’s more about being Benediction.”

Brookes stresses that point often. He also believes that death metal lost its way a little over the last couple of decades as newer bands came along with a conviction for extremity and speed above all else. That wasn’t his own experience with death metal, and he wants to show others how he thinks the style should be played.

“We were fortunate to grow up with bands like Autopsy and Death and a lot mid-paced stuff like that,” he says, “and it all seemed to get lost in the competition to be the fastest, and I think it’s lost a little bit. It’s become like a competition about how fast they can go or how technical, and I’m kind of hoping that death metal fans that have only got into death metal in the last eight or ten years… I want to introduce them into what I believe death metal is. A bit of groove and a bit of feeling. You don’t have to be the fastest to be the best. It’s not all about that. There needs to be a tune, there needs to be some rhythms in there. I’m kind of hoping we open a few eyes to that.”

In the twelve years since Killing Music, Rew and Brookes amassed a great deal of material for when the time came to record again. With that much to work with, they were certain to have plenty of really quality stuff and even for a band of consistent quality as Benediction, Scriptures is some of their best work.

“When we decided to do an album, we had a whole library of work we could pick up on. We had old songs we just nicked bits from. Stormcrow has got to be ten, 12 years old. Not the lyrics, obviously, but the music was written a long time ago. It doesn’t matter if it was written ten minutes ago or ten years ago, it’s still going to be Benediction. The songs on this album could easily have been on Transcend the Rubicon. I like that. I like that we are still the same band, we still do what we want to do. Nuclear Blast asked us to put keyboards on our albums, and we were like, ‘No fucking chance, mate!’”

His band hasn’t made him rich, but it has delivered Darren Brookes a wealth of other rewards. Eight well-regarded albums and thirty years of self-belief has taken him around the world – although he still hopes to get to Australia some day – and have the kind of experiences so many people never get to undertake. For the guitarist of an underground death metal band from the English Midlands, he reckons he’s doing pretty well.

“We’re so lucky to do what we do”, he says. “We don’t make a lot of money, but I get to travel the world and sit in a bar in some part of the world I’ve never been to – it’s mindblowing, mate. I’m fucking so lucky, mate. A lot of people don’t get out of their own country, so I’ve got to be thankful for what I’ve got.”