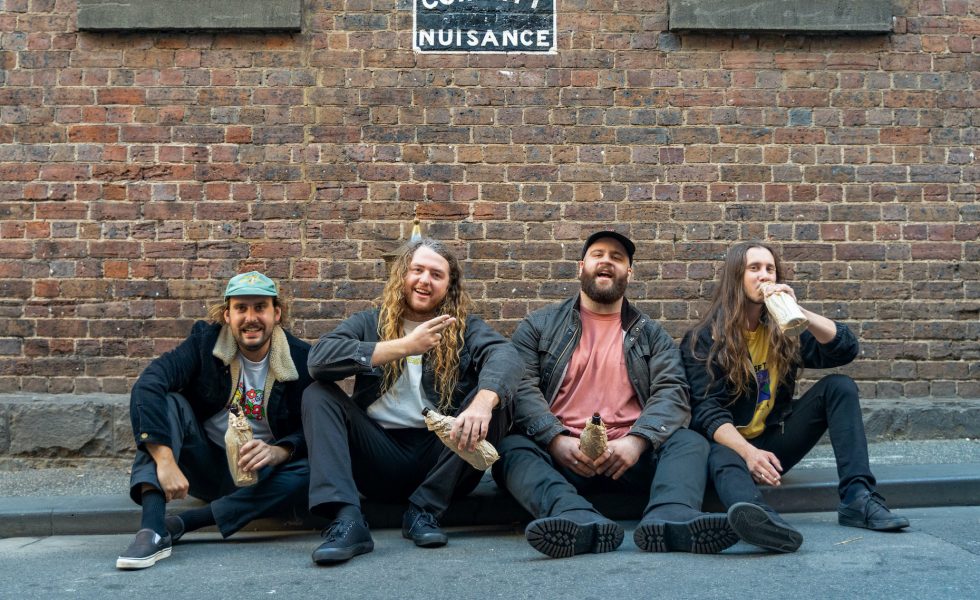 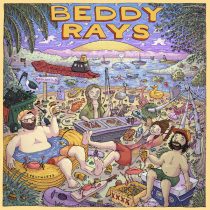 Like cracking a tinnie with a mate on a warm summer’s day, charming warmth and rugged charm lies in wait on the debut self-titled album from Brisbane coastal punks Beddy Rays.

An increasing staple in the Aussie industry since the 2017 release of their debut EP Lost Found Beat Around, Redland Bay’s favourite sons Beddy Rays have embraced the wholesome trope of transforming schoolyard mates into full-blown rockers, from their breakout 2020 anthem Sobercoaster which has snagged multiple millions of streams while also swinging in at #57 on triple j’s Hottest 100, to also garnering nominations at both the Queensland Music Awards and the National Indigenous Music Awards along the way.

And from humble origins of simply wanting to play music, sink tins and make friends to being in possession of their first-ever full length album, dropping Friday 29 July, their maiden LP Beddy Rays is ultimately an authentic and clever collection of songs that were destined to be consumed and screamed along to in a sunny festival setting. Answering the question of what it would sound like if Catfish and the Bottlemen moved to Australia and took up surfing, Beddy Rays is a sun-soaked outing packed full of effortless indie hues, dreamy hooks, and the occasional sharper moment from the band’s punkier leanings. Opening track Wait A While rollicks and frolics with creamy textures and relentless basslines, offering a polished opener that also negates your ability to sit still as it leads into an ode to breaking out of the grind via the punkier Week On Repeat. FOTU ups the riffage next alongside high-octane beats and emphatic choruses before On My Own takes a matured turn detailing the importance of taking time for yourself, without losing the Beddy Rays trademark punch (and a fiery riff or two for good measure).

Embracing their sturdy footing between the surf rock, indie and garage rock realms, Beddy Rays come out swinging, hugging and thumping on their first ever full length album.

Sort It Out gets rougher around the edges, with a high octane offering just shy of two minutes loaded with explosive drums and some punk-tastic wiles courtesy of frotman Jackson “Jacko” Van Issum, while Handful offers a breezy punk ballad amid swaying grooves and driving chugs. From more stripped back moments on the acoustic gem that is Brin’s Song, to an array of rowdier anthems (Milk, Ashtray, Feels Nice), Beddy Rays seamlessly flows between slight stylistic fluctuations without ever wholly shedding or significantly altering the signature Beddy Rays coursing through the album’s veins. But amid the overarching festival-ready vibes, there’s sizzling guitar solos (looking at you, Easy Man and Good With Bad), nostalgic gems (Coffee Stops) and so much more in this veritable sonic lolly bag from the Redland Bay boys. And, of course, just over the halfway mark of the album lies the “song that started it all”, with Sobercoaster striking a mouthwatering balance between youthful optimism and surf-meets-pub rock genius.

A snapshot of true blue Australian mateship and thumping good times, perhaps what’s most enjoyable throughout Beddy Rays, alongside the splashy drums, hypnotic arrangements and effortless vocals on full display, is the overwhelming sensation that this is ultimately a group of young creatives who genuinely enjoy being in the same room with each other to craft and create these affable and increasingly infectious indie anthems. Embracing their sturdy footing between the surf rock, indie and garage rock realms, Beddy Rays come out swinging, hugging and thumping on their first ever full length album. And while it may be named after the band themselves, there’s no ego or posturing in sight on Beddy Rays; instead, Beddy Rays have vehemently cemented their status as purveyors of feel-good tunes and universal relatability that will tickle multiple airwaves as well as those pining for non-stop summer festival moments. And with a heap of shows in sight later this year, it’s only a matter of time before you can witness this album live in action.

STANDOUT TRACKS: On My Own, Sort It Out, Sobcoaster, Easy Man
STICK THIS NEXT TO: Wavves, British India, Hockey Dad, Catfish and the Bottlemen