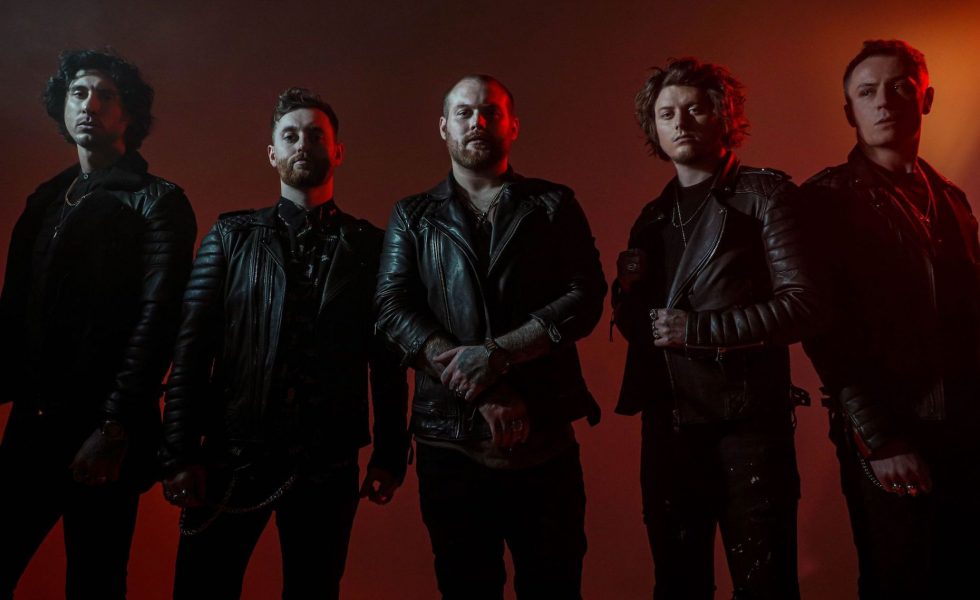 After fronting a massively beloved band for 15 years, you’d assume that you are living the ‘rockstar’ lifestyle. So when Danny Worsnop, the frontman of Asking Alexandria jumped onto the Zoom call from a suite in Las Vegas’ revered hotel The Bellagio, it seemed all too fitting.

Having spent the day with Zoltan Bathory from Five Finger Death Punch at a castle that he had just bought on the outskirts of Nevada, Danny, who had just woken up, was by his own admission feeling “half-dead”. On the other hand, Ben Bruce, the group’s iconic guitarist was tuning in from home in England with a cup of tea in hand, after he had to “pause cooking dinner tonight so [he] could wipe [his] son’s ass.”

A stark contrast for the two rockers who have been tearing up stages worldwide since they took the reins on the mid-2000’s ‘screamo’ movement.

Now nearly two decades later the group’s highly anticipated seventh LP See What’s On The Inside is dropping today and the excitement around the Asking Alexandria camp was evident as the members discussed their most expansive release to date.

“It was a very organic process,” says Ben, “if something wasn’t working we didn’t sit there trying to beat a circle into a square, instead we’d just go ‘this isn’t working, next.”

“That’s been one of the hardest lessons we haven’t learnt, knowing when to scrap something,” Danny says.

“So many times in our career we have just forced ourselves to try and make something work and sure, sometimes we have pulled it off but more often than not it’s ended up being something a little more lacklustre than it could have been.

“The kind of stuff that you can look back on and go, ‘I know what we should have done there,’ or even, ‘maybe that idea wasn’t worth exploring at all.”

Furthering the notion and discussing what may have ended up on the cutting room floor for album this release, Ben said “I think the only time we really sat and banged our heads against the wall was for The Grey, because there was a vocal melody that was so powerful and so poignant and just huge and we thought, ‘we can’t not use this.”

“But we were struggling to put something around it to match the emotion that Danny was giving. I think that was the only struggle mainly and it wasn’t because it wasn’t good enough. It was because it was too good and I struggled to match that level.”

Straying away from electronic elements that the band became synonymous with in their early days, See What’s On The Inside sees the incorporation of orchestral components. A dream of Ben’s since he first saw the Metallica S&M concert.

It was a very organic process. if something wasn’t working we didn’t sit there trying to beat a circle into a square, instead we’d just go ‘this isn’t working, next.’
[ Ben Bruce ]

“I think that would have been the first metal band playing with an orchestra that I came across, or the Scorpions show,” he says, “but it has always been something I’ve wanted to do. Hopefully, if enough people enjoy this record we will hopefully be able to do that in future especially seeing as we actually used the instruments on this release.”

“There is not a single synth or computer generated thing on this record. If we wanted strings, we got string players. If there’s piano, it’s Sam Bettley. If there are vocals then it’s Danny singing, not the robot Danny.”

Although it wasn’t just orchestral components added into this release with Danny also expanding on elements that he has quite rarely dabbled with, a hip-hop flow. Having already tried it on, Empire (off the self titled release), Faded Out, one of the bands new songs sees Danny tackling what he has been described as a rap battle against percussion.

“It’s really funny because Danny obviously had the idea in his head for that section and he comes to the studio one day and goes, “I want to do a rap battle’ and I was like ‘what?’ Because he was saying it to me and I can’t fucking rap,” laughs Ben.

“Then he’s like ‘yeah i want to do a rap battle,’ so I asked ‘with who?’ and he responded ‘James’…who also cannot rap.”

“As a group we have spoken so many times about how unfathomably good the rapper MF Doom was,” remarks Danny. “His music is so energetic, it just does something inside you.

“We have always asked ourselves, ‘how do we capture that energy?’ So Faded Out is very much a moment inspired by his work.”

With See What’s On The Inside set for release today and our country still being locked down, it might be a while until we get to see the lads make their way over to Australia. But as stated by the band, when they do make it over Ben says “it’ll be awesome because we will have two new albums worth of material to debut to Australian crowds.”