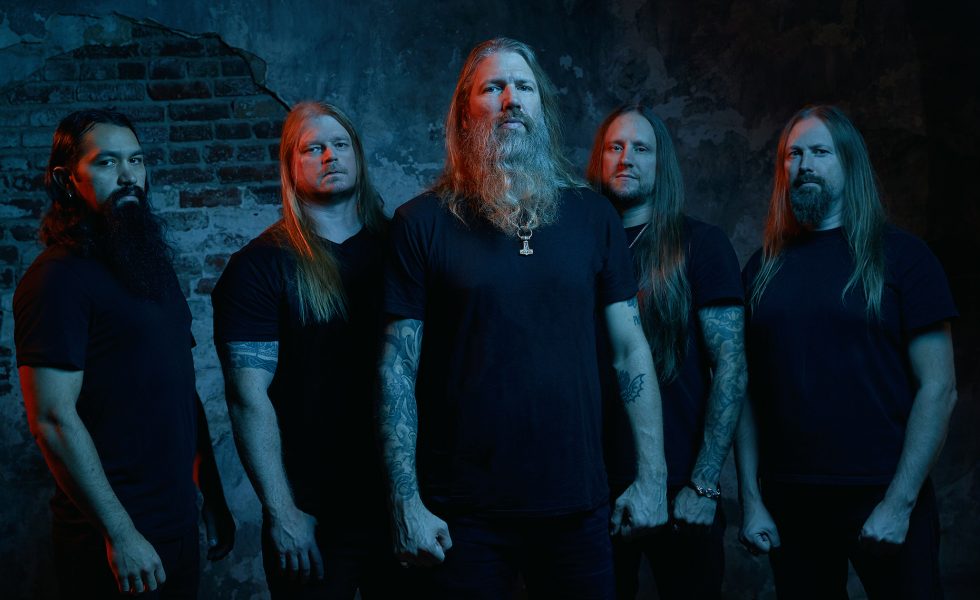 The berserker–the fearless, manically possessed warrior of Viking legend–is one of the most notorious and intriguing figures to emerge from Scandinavian history. Such is the theme of iconic Swedish melodic death metal band Amon Amarth’s tempestuous eleventh studio album, Berserker.

“Well I mean it’s a great story,” vocalist Johan Hegg recounts, explaining how the title was chosen. “Its one of those amazing legends really that has survived the ages, the way the battle [Stamford Bridge, 1066] progressed, and what one person did is exceptional. Basically what he [a Viking berserker] did was hold off the entire British army, which in itself is not a small feat. It was the perfect ‘title’ track [The Berserker of Stamford Bridge]; it is majestic, even though being like a slow tempo song it’s still brutal and dark.”

Berserker opens in true Amon Amarth style, with Fafner’s Gold: a fiery onslaught straight from the realm of Norse mythology … “I think the song itself was a strong opener, like musically,” Hegg explains, “but lyrically I also think its one of the most fascinating stories from Viking or Norse mythology, where it has all the elements of betrayal, brother hatred, cursed treasure … but what it really comes down to, it’s a song about greed. It’s all about greed and what it does to people, really.”

Berserker arrives three years since Amon Amarth’s highly successful eighth album, Jomsviking, and Hegg is clear that musically, it continues Amon Amarth’s progression towards embracing greater creative freedom. He reflects, “… I think that what we’ve done is probably just keep on the road that we have been travelling since a few years ago where we kind of let the inspiration through, our influences and everything just be very, like, obvious in the music where we in the past maybe would sort of censor ourselves with certain things because we felt it was maybe not like ‘metal enough’, or ‘death metal enough’ … we’ve let our creativity take whatever turns it wanted and run with it. I think that’s mainly the difference, that we’re even more open about using every creative element that comes to mind really.”

On whether this open-minded creative approach consciously produced the dramatically dark turn towards the end of the album, Hegg states, “I’m not sure if it was super conscious, I think we felt it would be good way to end the album that way. Also, as you say, I mean, obviously, Into the Dark, it is a very dark song, lyrically dealing with a topic that I’ve come across recently in many aspects, it’s mental health, and it’s an important thing to talk about, because of a lot of people suffer from mental health problems … so it is something we need to talk about, something we need to address. And having said that, in the other aspects of the later songs on the album we have Wings of Eagles, which is also kind of a sad story in a way, where the Vikings sailed to North America, to Vinland, and unfortunately, they tried to settle there but they failed and had to go back. But then again there is also When Once Again We Can Set Our Sails which is a very kind of sad song in a way, but also optimistic … right now we are resting but soon we will be heading out there again, and travelling the world … There’s a lot of positivity as well. “

But I think this is more like, the underlying themes are more personal on this album, even though its not necessarily super obvious, and I don’t really intend it to be either
[ Johan Hegg ]

Whether Berserker therefore engages with a broader emotional spectrum than Amon Amarth have traditionally invoked, Hegg makes a careful distinction. “I’m not sure”, he pauses, then explains “I mean, the previous album [Jomsviking] was very emotional … that was a concept album, it had a story for it, a lot of emotional stuff going on there. But I think this is more like, the underlying themes are more personal on this album, even though its not necessarily super obvious, and I don’t really intend it to be either.”

Well, one may suppose there is little that is more personal to a Viking warrior than his legacy, which is the resounding message in the relentless, chant-like strains of Ironside, a track that excites the historical aspects of Hegg’s lyrical influences. “The idea came to me when I heard the song,” Hegg recalls, “I just immediately knew this was going to be about Ironside [laughs]. Björn Ironside is a fascinating character in Scandinavian history. Supposedly he was the first king of Sweden, supposedly was the son of Ragnar Lothbrok. Even though Ragnar Lothbrok’s existence is debatable … Ironside did in fact exist and when you look at him, if you think about the way he is portrayed in Vikings [the television series] they did a really good job, because they do portray him as kind of following in his father’s footsteps but is struggling to do so because his father, if he existed, obviously would have been a very formidable man, who would cast a big shadow over anyone following him up. So that’s kind of what I wanted to portray him as, it could be a struggle for someone following in those footsteps to make their own mark in history. And I think also the fact that his name ‘Ironside’ is really fascinating by itself, its what we call a ‘kenning’, basically a name you get for something you achieve, and the reason he was given the name ‘Ironside’ is because supposedly he was never harmed in battle at all, so weapons didn’t bite on him.”

So, what exactly does the ‘berserker’ represent for people today? Hegg just laughs. “The Berserker as a concept is just someone who likes to have a good time and party … we are a violent people, obviously! Having said that, the berserker [as a an historical figure] was actually mythological, because no actual proof of them existed, except for mentions in a few texts, there is no archaeological proof. Its debatable whether they existed or not, but it’s a fascinating thought …”