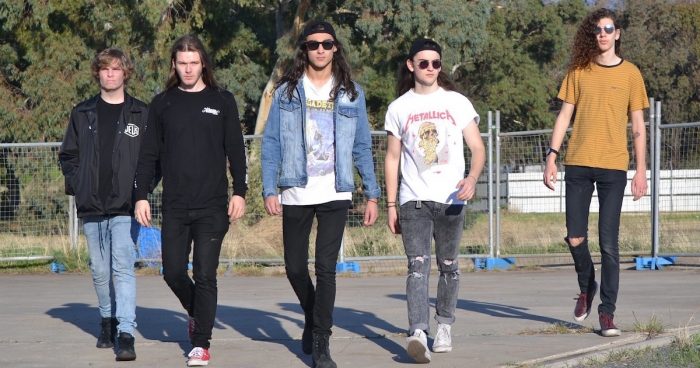 Adelaide thrashers Alium are relatively new to the Australian metal scene, having yet to play shows out of their hometown and with only two single releases under their belt, but they bring a level of maturity to their music that belies their young ages.

MORE: HALLOWEEN HYSTERIA 2019: Throws A Hard Six With New Additions To Line-Up REVIEWS: HELLOWEEN: United Alive in Madrid // REFUSED: War Music // CITY AND COLOUR: A Pill For Loneliness // HARD-ONS: So I Could Have Them Destroyed // ALIUM: Fallen

Hysteria had a chat with vocalist Rhys D’Sylva-Peck about how they got started, where they draw their influences and what they have planned for the future.

Maybe it’s the influences of classic metal bands like Iron Maiden and Metallica, where the band cut their teeth playing their favourite covers until they had enough of their own material ready to unleash, or maybe it’s the shrewd way in which they observe the ever-changing music industry around them and adapt with it as they need to. Whatever it is, Alium are starting to make some waves in the heavy scenes around Adelaide and now, they are looking to make some waves around Australia.

Alium are a relatively young band, with D’Sylva-Peck, Tom Short and Julian Harmer getting together in high school, bonding over and jamming some classic thrash metal. “We actually got a bit of a name for ourselves when we started, people were calling us ‘Metalium’ because all we played were Metallica covers,” D’Sylva-Peck laughs, recalling how the band got their start.

It wasn’t long though until the band found their bassist in Henry Scott and settled on the direction they wanted to take their sound and then really began to jam and write in earnest. “Everybody loves old school heavy metal. Nothing beats old school Iron Maiden, Metallica or Pantera. So we really wanted to keep the old school vibe but add some modern elements into it. We absolutely love using guitar harmonies and longer solos and clean guitar interludes and things like that,” D’Sylva-Peck explains of Alium’s sound.

When we’re jamming and listening to our playlists, we’ll be listening to Infant Annihilator, then maybe an Ed Sheeran song will come on and then a bit of Post Malone might pop up! I feel like we take, not necessarily a direct influence from a song, but when we hear something that sounds cool in a song, whether it be a hip-hop song or a rap song, we always figure out how we can implement something similar to that into our song-writing process
[ Rhys D’Sylva-Peck ]

Their modern take on the old school style brand of metal is definitely getting them noticed as just after they formed, the band came runner-up in a Battle of the Bands, and this year saw them invited to play the coveted boutique festival Heavy SA in Adelaide, where they also introduced George Carey into the band on rhythm guitar after D’Sylva-Peck broke his wrist. “When I broke my wrist we found George as our fill-in guitarist, but we just loved him so much that we decided to keep him on board,’’ D’Sylva-Peck says of how the band ultimately became a five-piece.

With Carey now a permanent member, and joining the lineup in time to be a part of the second single release, Alium have a wide range of influences on which to draw from when they write their new take on thrash and classic heavy metal. “When we’re jamming and listening to our playlists, we’ll be listening to Infant Annihilator, then maybe an Ed Sheeran song will come on and then a bit of Post Malone might pop up! I feel like we take, not necessarily a direct influence from a song, but when we hear something that sounds cool in a song, whether it be a hip-hop song or a rap song, we always figure out how we can implement something similar to that into our song-writing process,” D’Sylva-Peck says.

While these influences might not be as obvious as the ones the band clearly wear on their sleeves, having that vision to be able to experiment freely in their music means that Alium can show off a broader spectrum of music as they mature and evolve, even though they still regularly enjoy playing a cover when they are up on stage. “We like to play at least one cover as we find it keeps people nice and engaged. Especially if they haven’t seen us play before, it gives them a song that they can relate to, sing along with and mosh to,” D’Sylva-Peck explains.

The covers that Alium bring into their sets have certainly changed since the days they used to be nicknamed ‘Metalium’, with the band enjoying having a crack at some other classics like Zombie, the 1993 hit from The Cranberries. But does this mean the band might branch out even further with their covers?  “Sometimes we’ll whip out a Lamb Of God song, or Parkway Drive, easy stuff that everyone knows,” D’Sylva-Peck says, before hinting at the next track they could tackle. “Do you know that song, Take What You Want, the Post Malone song that features Ozzy Osbourne? We might even try our hand at doing that song soon!’’ D’Sylva-Peck says cheekily.

For now though, Alium are just trying to decide what their next steps will be, when it comes to releasing more music. “We have a plethora of songs written and at the moment we are just trying to figure out the best way is to get them out to our listeners,” says D’Sylva-Peck. “Whether we release another single to give a taste of the broader spectrum of the type of stuff that we write, or whether we just go all out and release an album because we do have enough tracks for an album,’’ he continues.

It’s a move many bands are considering these days, as the industry and the way music is consumed by fans is constantly evolving and Alium are keeping a close eye on these current trends in an attempt to set themselves apart, as they look to gain new fans and grow their band. “I feel like a consistent release of singles keeps the audience interested. Rather than dumping a bunch of songs all at the same time that, someone might listen to only once or twice and then be like ‘so when is the next thing coming out?’” D’Sylva-Peck muses. “But on the other hand people could be like ‘Stop taking advantage of us! Give us an album!’” D’Sylva-Peck laughs. “We’ve had mixed opinions about that”.

In the meantime though, as the five look to break out of Adelaide and make a name for themselves around the country, you can expect to see them starting to travel around a bit more. “We’re looking at arranging some things for mid-January, in the Melbourne area,” D’Sylva-Peck says. “We don’t necessarily have to conquer the Adelaide audiences before you move interstate, I don’t believe. I feel like we could try and take over everywhere, all at the same time!” he laughs.

So keep an eye out for Alium in your city soon, and in the meantime, check out their latest single Fallen, right here.